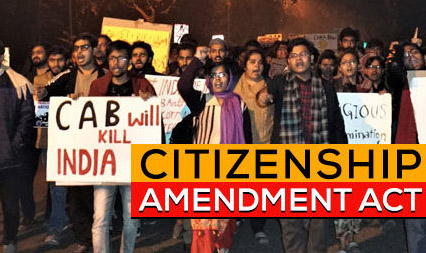 There are a series of ongoing protests, which began in Assam, Delhi, Meghalaya, Manipur and Tripura on 4 December 2019 and spread to the other parts of the country. The protests are going on against the Citizenship (Amendment) Act, 2019, which was cleared by the Union cabinet on 4 December 2019, and later passed by both houses of the Parliament turning the bill into an Act of the Parliament. The Act has been criticized and termed unconstitutional by several eminent constitution lawyers such as Soli Sorabjee, Markandey Katju, Ashish Goel, and Suhrith Parthasarathy. Several organisations have petitioned the Supreme Court of India to declare the enacted law illegal.
The Citizenship (Amendment) Act, 2019 (CAA) is an act of the Indian parliament amending the Citizenship Act of 1955 to give a path to Indian citizenship to illegal migrants who are Hindus, Sikhs, Buddhists, Jains, Parsis and Christians from Afghanistan, Bangladesh and Pakistan, who entered India on or before 31 December 2014. The Act does not mention Muslims and does not offer the same eligibility benefits to the Muslim migrants. It also seeks to relax the requirement of residence in India for citizenship by naturalisation from 11 years to 5 years for these migrants.
The opposition claims that the CAA ring-fences Muslim identity by declaring India a welcome refuge to all other religious communities, that it seeks to legally establish Muslims as second-class citizens of India by providing preferential treatment to other groups and therefore violates Article 14 of the Indian Constitution, which guarantees the fundamental right to equality to all persons. Critics of the Act have stated that due to the National Register of Citizens (NRC), Muslims could be made stateless while the CAA would be able to shield people with Hindu, Sikh, Buddhist, Jain, Parsi or Christian identity as a means of providing them with Indian citizenship if they failed to prove that they were citizens of India under the stringent requirements of the NRC.
The people of Assam and other northeastern states continue to protest fearing that illegal immigrants from Bangladesh in their regions would be allowed to stay, as many migrants from Bangladesh are Bengali Hindus. The CAAct directly challenges clause 5 of 1985 Assam Accord.

The objective of the legislation is to grant citizenship to those Hindu/Sikh/Christian/Parsi/ Buddhist/Jain immigrants from Pakistan, Bangladesh and Afghanistan, who have fled due to religious persecution. It may seem perfectly anodyne and even laudable in itself. However, the omission / exclusion of certain communities and neighbouring countries has raised several questions over its moral rationale and constitutional validity. The logic extended to justify the selection of the three neighbouring countries is that these are Islamic republics, or have Islam as a state religion and, therefore, the aforementioned six communities face the threat of religious persecution. However, by this logic, immigrants from Sri Lanka and Bhutan should also have been covered as these two countries too have Buddhism as their state religion. A large number of Tamil (Hindus as well as Muslims) immigrants from Sri Lanka are living in refugee camps in India, and there have been instances of minority communities being targeted by majoritarian forces in Sri Lanka. Furthermore, in a typically prejudiced manner, there is a flat refusal to acknowledge the persecution of Muslim minority sects like Ahmadiyyas and Hazaras in Pakistan and Afghanistan, respectively, as is the case with Rohingyas in Myanmar. Can the religious criteria to grant citizenship be a case of reasonable classification under Article 14 that upholds equality before law? More importantly, can a humanitarian impulse to stand with the persecuted be a selective or qualified one?It is a fact that such a discriminatory and arbitrary legislation has been brought in. It indicates that the bill was not in response to a concern for persecuted minorities in the neighbourhood, but instead reflects the ideological zeal to target minority groups in India. The CAA cannot be seen in isolation from the National Register of Citizens (NRC), which the ruling party seeks to implement nationwide. Going by the pronouncements of the leaders of the ruling party, the CAB and NRC are indeed conjoined projects, though having different origins or diverse implications in regions such as Assam or other north-eastern states.

The ruling BJP seems to be communicating to the communities that are included in the CAA that, even if they were to be excluded from the NRC, there will be other means by which they could be granted citizenship. The legal feasibility of this assurance notwithstanding—for there are evident pitfalls—this implicitly suggests the privileging of the claims and rights of certain communities on ethno-religious grounds. On the other hand, the message to the communities excluded from the CAA is that if they were to be excluded from the NRC, they are condemned to extreme uncertainties and insecurities, thereby making their already de facto secondary-citizen status into a status of de jure non-citizenship or statelessness. Seeking to consolidate the majority community by isolating and targeting the “other,” the ruling party’s divisive and narrow calculations threaten to open up multiple fault lines in a diverse and unequal society like ours.

The BJP’s confidence that it can manage these contradictions by resorting to successive manipulations is already eroding as Assam has erupted in protest against the CAA. In a society with multiple axes of diversities, inequalities, and conflicts, the politics of pitting masses against a constructed “other” can neither be a stable and perpetual one nor can it be controlled like a laboratory experiment, but can unleash fissiparous tendencies that would threaten the social harmony and peace that the broad masses desire in their everyday life. If the ruling party’s design to keep the pot boiling constantly is to be checked, the vast majority of Hindus—in whose name the ruling party is pushing its sectarian agenda, and which large sections among them would not approve of—need to see the current bill as an existential threat to the values enshrined in the Constitution and stand up in defence of these values.
On the other hand, the series of ongoing protests, which is being spread by certain political parties, without understanding the provisions of the enacted law and its implications, should be stopped immediately. The BJP government has been voted to power to perform and to deliver. The enacted law is under Supreme Court scanner and its constitutional validity is under acid test. Without waiting and watching for the outcome of the judgment, the students and the youth should not resort to roadside anarchy. Let’s remember, India should not afford to accept the illegal migrants forever and provide them whatever small facilities provided to its citizens. 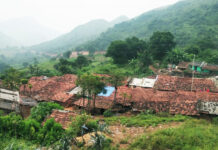 KOTIA: Initiate Talks and Sort it Out