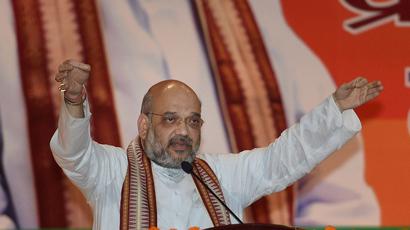 Shah is aware that Ratna Bhandar has remained an emotive issue. He played on it. “How can the people who could not safeguard the Ratna Bhandar be entrusted with the security of the state?” he asked.

Prime Minister, Narendra Modi may be unwilling to attack chief minister, Naveen Patnaik, triggering speculation about a secret pact between them but BJP president, Amit Shah is in no mood to pull his punches against the Odisha leader.

Shah’s war cry at Salepur recently fired up the cadres who had been feeling let-down by Modi’s reluctance to take on Patnaik during his last few visits to the state. The Prime Minister appeared to have deliberately toned down his aggression during the public meetings at Khurda, Baripada and Bolangir.

Now Shah seems to be in an aggressive mood. Significantly BJP chief’s visit came in the wake of Patnaik’s sister and well known author, Geeta Mehta turning down the Padma award which was supposed to be a conciliatory gesture ahead of the polls. Geeta’s gesture appears to have convinced the saffron party bosses that Odisha chief minister is in no mood for compromises and it would be futile trying to adopt a soft approach towards him.

No wonder, Shah did not pull his punches against him; as he issued the call for building up a new Odisha which, he said, was possible only if a BJP government was voted to power in the state.  “There are still households without assured water supply and electricity. A new and prosperous Odisha is possible only if a BJP government comes to power in the state,” he told party workers while reeling out statics to prove that Centre had sanctioned more than rupees three lakh crores for the development of the state.

In an election speech during which Shah made repeated pleas for Modi being voted back to power again at the Centre and took aim at Congress and its allies he also played the tribal card and tried to strike an emotional chord with the electorate by raising the issue of the missing keys of Puri Jagannath temple’s Ratna Bhandar. “Modiji created the District Mineral Fund with an eye to the welfare of the tribals. He wants that the money which used to line the purses of industrialists should help make the lives of tribals better,” said Shah.

Aware that Ratna Bhandar was an emotive issue he played on it. “How can the people who could not safeguard the Ratna Bhandar be entrusted with the security of the state?” he asked as if mocking the Patnaik government. Shah, who described BJD and Congress as two sides of the same coin, also targeted Patnaik’s Achilles heel urging people to elect a chief minister who knew Odia.

The BJP chief, who has set state party leaders a stiff target of winning 120 out of 147 assembly seats, appears to be still treating the results of the 2017  panchayat elections, when the party won 297 zila parishad seats, a quantum jump from 36 in 2012, as the benchmark. This was obvious from the way he sought to remind the workers at Salepur of the last panchayat poll outcome while exuding confidence about lotus sprouting in the state in the general elections.