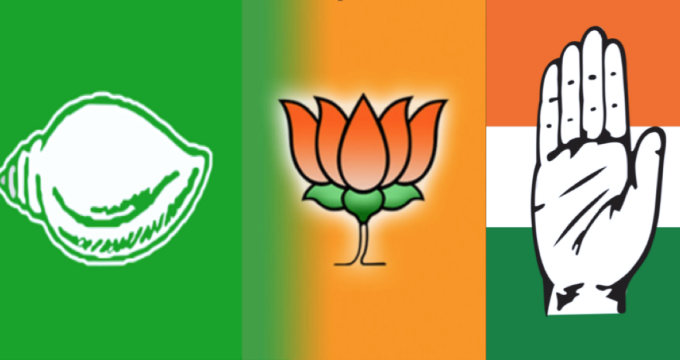 The victor and vanquished are worried alike. While BJD and the BJP are being plagued by internal dissensions in the wake of panchayat polls and have been forced to take corrective steps, the Congress, which is looking down the barrel, is planning a complete overhaul to ensure a better performance in 2019. All the three major parties are trying to sourt out problems and will be putting their best foot forward as they prepare for the Big Battle two years from now.

The process of internal churning has begun in all the          parties in the wake of panchayat polls results with major parties now gearing up for the general elections in 2019. Some of the parties, specially the Bhartiya Janata Party (BJP) and Biju Janata Dal (BJD), have also seen internecine feuds breaking out. One of the first to be signed by the feud fire was the BJP whose senior leader, Sameer Mohanty was attacked by his own party workers at Sambalpur, the fall-out of the factional fight between former minister, Jaynarayan Mishra and Suresh Pujari.

In the wake of the attack Mishra was suspended from the party for six years. Though he claims innocence and blames Pujari for the muddle it is clear that everything is not well in the party. Something similar also happened in the BJD in the undivided Koraput district where former minister and senior tribal leader, Jayram Pangi was suspended from the party following a fracas over zila parishad chairman’s post.

The panchayat elections have lessons for both the parties while Congress stands so decimated that it is now busy picking up the pieces. State Congress president, Prasad Harichandan despite support from his father-in-law and former minister, Suresh Kumar Routray and some others, has been able to do little to ensure that the situation improves.

This, despite the fact that the Congress, which lagged behind its rivals in the zila parishad (ZP) elections, virtually relegated the BJP to third position in the election to the chairpersons for panchayati samitis. However, ruling Biju Janata Dal (BJD) continued to assert its supremacy by bagging the highest number of these samitis, a measure of its hold on the rural masses.

The BJD, for the beginners, claimed that it has been able to form panchayat samitis in 218 out of 307 blocks of the state where elections were held.  The Congress emerged second in the race bagging 45 samitis and BJP was relegated to the third position securing only 29 samitis. While the Congress has not been able to form a single panchayat samiti in 13 districts, the BJP has scored a zero in 16 districts, sources said.

Panchayat Samiti chairpersons wield considerable power as he they have the responsibility of executing various developmental projects in the blocks. They are the power centers at the grassroots level.  “We carry out all the developmental works through the samitis,” said BJD spokesperson Sashi Bhusan Behera.

Incidentally, once a panchayat samiti chairperson is elected, no no-trust motion can be passed against him or her in the first two and half years of his or her term, thus giving an advantage to any party with maximum support of these office bearers as it gets sufficient time to shape its strategy in the rural areas. The election for the post of Zilla Parishad chairmen will be heldtomorrow. While the BJD is set to form zilla parishads in 16 districts, the BJP is likely to constitute Zilla Parishads in eight districts and Congress in one. The zilla parishad elections will not be held in Malkangiri and Nuapada districts and fate of the three others districts hangs in balance as no party enjoy a majority in these areas.

For all BJP’s braggadocio about its spectacular showing in the panchayat polls it failed to breach chief minister, Naveen Patnaik’s fortress in Ganjam. Led by Patnaik, who this time campaigned only in Hinjili, his assembly constituency in Ganjam district, the BJD has captured 63 out of the 69 zila parishad zones in the district. The BJP could manage to get only four.

That Patnaik’s fortress remains impregnable is evident from the fact that BJP had pulled out all stops to make a dent in Ganjam deploying heavyweights such as union tribal affairs minister, Jual Oram who campaigned in the district extensively.

The polling percentage, though, was lowest in the district—67 percent—the people remained loyal to the BJD and the chief minister. The BJP also came a cropper in Nuapada the home district of its state president, Basant Panda.

The focus has been on BJD’s good showing in Ganjam district but the polls there were marred by violence leading to the death of two persons including a sarpanch candidate  identified as Bulu Pradhan. He was killed in a group clash before polling.

Analysing the outcome BJD  spokesperson Rabi Narayan Nanda said “Congress vote has been transferred to the BJP which helped them win in a number of ZPs. But our party will change its strategy and bounce back.” Incidentally,  Congress has failed to open its account in 15 districts.

Significantly, while Naveen remains invincible on his home turf, some other leader of his party have failed to protect their bastions. The ruling party leaders sought to put the blame for their defeat on the use of money by the BJP in certain areas citing the example of seizure of cash worth Rs.2.11 lakh from a BJP leader of Chhatisgarh in Kalahandi.  “The BJP found it easy to resort to such tactics as parts of the state share borders with Jharkhand and Chhatisgarh,” said BJD leader Ananta Das.

Ruling BJD and BJP, its main rival, had pulled out all stops to outdo each other in the final phase of the three-tier panchayat polls. The BJP’s rise has virtually decimated the Congress as far as zila parishads are concerned while BJD remains the number one party in the state.

“People have found an alternative.  The people have accepted our symbol and shown their loyalty for Prime Minister Narendra Modi,” said BJP vice president, Samir Mohanty.

Besides becoming a pan Odisha party, the BJP which had earlier been confined to the western Odisha, has consolidated its base in the 63 assembly constituencies that it had contested in 2009. The BJP has not only made inroads into coastal Odisha but also tightened its grip on southern, western and northern Odisha districts.

”We thank the people of Odisha for their support. The support for the BJP has been reflected in their verdict,” said a senior BJP leader. BJD vice president Surjya Narayan Patro said, “Our calculation went wrong at some places. We will go for a self-introspection.”   He was one of the senior most BJD leaders spearheading the party’s campaign in western and southern Odisha.

Party’s spokesperson Rabi Narayan Nanda said, “The BJP should stop bragging. We have done reasonably well.” In Kalahanadi district, where the party was routed with all ZPs going to the BJP, the ruling party’s election campaign was led by housing and urban development minister Puspendra Singh Deo and its spokesperson, Captain Dibya Shankar Mishra. But they failed to make an impact. There is already talking of large scale changes in the BJD organisation. The BJP and the Congress, too, would take some drastic steps as they gear up for the big battle in 2019. March 16-31, 2017