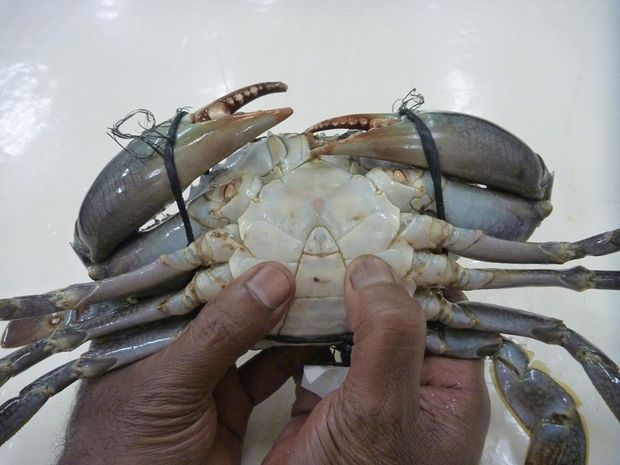 Kendrapara mud crabs, also known as mangrove crabs, are no more available now a days. It is due to establishment of several plants in Paradip that release their effluents into the sea where it meets the Mahanadi. Besides, the practice of catching juveniles also has an adverse impact on the mud crab population.

Once a common sight in the fish markets of coastal districts such as Kendrapara mud crabs (Scylla Serrata) are now rarely seen. Also known as mangrove crabs, as they thrive in the mangrove swamps hugging the coastline, they are a delicacy in this region on account of their ample and flavoursome meat.

But with falling catch they have become hard to get. Kapi Majhi, a fisherman from Bahakud village in Mahakalpada block of Kendrapara, where mud crab trade once flourished, said that the catch per catcher per day had dropped from 10 kg to about 3 kgs in the last few years.

He attributed the drop in the catch to growing water pollution caused by industries and wrong catching practices. “There are several plants in Paradip that release their effluents into the sea where it meets the Mahanadi. Besides the practice of catching juveniles also has an adverse impact on the mud crab population,” said Majhi.

People of more than a dozen villages in six panchayats in Mahakalpada block make a living out of catching and selling mud crabs. As a result pressure on the species that fetches traders Rs.70 to Rs.80 per kg in cities like Cuttack and Rourkela keeps growing. “ Traders even from Calcutta come here to buy crabs,” said Prafulla Mahakud, a veteran crab trader of Ramnagar admitting that the dwindling harvest had become a cause of concern for traders as well as catchers.

Big traders like Ranjan Gharami of Ramanagar, who employs Shabar tribals to catch the crabs, make most of their money during the monsoon and winter months when these crustaceans are at their fleshiest best. “The catch in the summer is not of much use because crabs don’t have much flesh on them during this period. They don’t also taste good in summer and hence don’t fetch good money,” he confided.

The crabs are dangerous and can pierce fingers within a split second with their sharp claws but tribal catchers remain undeterred and pull them out of their burrows in the mangrove swamps with their bare hands. They go out into the swamps in the boats provided by the traders, most trips lasting three to four days. They also run the risk of being caught by forest officials who guard the mangrove forests round the clock.

But for the catchers these risks come with the territory. In fact, shrinking catch is a bigger worry for them than being caught by the authorities. Arjun Mallick, one of the tribal catchers from Ramnagar, said, “ it is a matter of livelihood for us. Someone has to find a way of increasing the catch.” May-01-15-2017