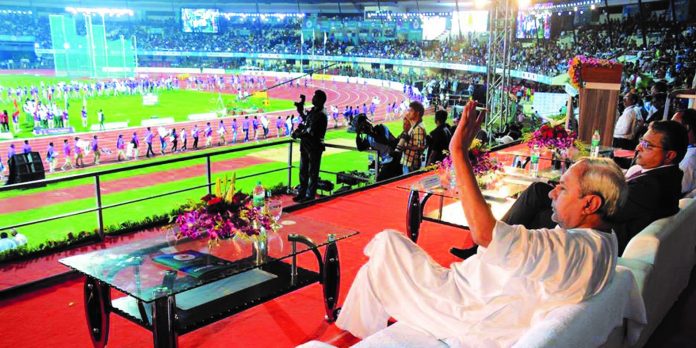 Chief Minister, Naveen Patnaik’s political stock has gone up with the successful organisation of Asian Athletics Championship in Bhubaneswar. He has emerged taller as a politician and is earning praise all around. This is likely to rattle his opponents but their negative politics is certain to boomerang

The challenge of organizing the 22nd Asian Athletics Championships in Bhubaneswar within a record 90 days put chief minister, Naveen Patnaik on his mettle and he proved that he was up to it. With the successful organisation of the prestigious event he has earned accolades from one all including his political adversaries.

The BJP leaders, who practically boycotted the games, have been left with egg on their face. Their absence at the games has been criticized and if their intention was to score political points they have lost badly.

From all accounts the staging of the games in Bhubaneswar, the emerging sports capital of India, has been a political coup for Patnaik who has emerged taller and stronger. The fact that his government agreed to organize the mega sporting event after neighbouring Jharkhand chickened out at the last moment has been appreciated at the national level. It has come as fresh proof that he is not one to shirk from taking up challenges.

Quite significantly, the Odisha visit of BJP president, Amit Shah went virtually unnoticed amidst the euphoria over the Asian Athletics Championships which saw crowds occupying the galleries at the Kalinga stadium in full capacity, specially during the inaugural and the closing ceremonies. People were seen enjoying the event and praising Patnaik for putting Odisha on the international sporting map. No one discussed Shah.

A clever politician Patnaik while showcasing his government’s efficiency through the organisation of the event, took the opportunity to highlight the major milestones of his government. This rattled rival BJP and Congress with the former accusing him of using a sporting event to publicize his government’s achievements.

But neither the ruing Biju Janata Dal nor lakhs of his admirers around the state found anything wrong with that. “The very fact that he organized such a showcase event within such a short time has to be appreciated. What’s wrong if the government also highlights its achievements on such a momentous occasion?” asked a sports lover from Bhubaneswar.

But the chief minister does not need an excuse to foreground the good work done by him. There is a long list of welfare schemes, which have earned him both praise and votes in the elections. Perhaps the most popular of these schemes is the cheap rice scheme which has endeared him to the poor and the dalits who, once forced to go without food, can now have two square meals a day, thanks to the rice that they buy for just Rs.1 per kilogram.

To begin with this rice was sold for Rs.2 per kg but as the number of beneficiaries went up and the government realized how it was helping eliminate hunger in the state the price was reduced. This meant additional financial burden for the state government but Naveen did not baulk. He also faced opposition from rivals in the Congress and the BJP, specially the latter which accused of taking credit for the schemes of central government but he continued to do the good work unfazed.

The results are there for everyone to see. The BJP, which had tried to make an issue of how the state was using the central quota rice, could barely reach double digit figure in the 2014 elections but the BJD scored an astounding victory bettering its past record.

The other major schemes to have paid political dividends for Naveen include Mission Shakti for the development of women, Mamta for expecting mothers and Aahar that provides cheap meals to people in urban areas. There have been special schemes also for scheduled tribes who, for the first time, are beginning to prosper. In fact, development of tribal areas has been a priority for the Naveen Patnaik government.

Equally important has been state’s development on the industrial front, an area which has helped transform the image of the state which at one time was known at the international level only for starvation deaths and droughts. The stories of Phanas Phunjis and Binitas reached every nook and corner of the world and Odisha earned a notoriety that became a challenge for the state government to live down.

The image began to change once big time investment started coming to the state. Among big ticket achievements was the proposed steel plant project of South Korean company, POSCO in Jagatsinghpur district and Arcelor-Mittal’s 12 million tonne project in Keonjhar district. Though both the projects failed to materialize people realized it was not the state government’s faulty. Instead the circumstances created by the Centre were to blame, especially in the case of POSCO which failed to get the desired mines.

But the government’s image received a major boost from the very fact that it was able to attract such global giants. It was a matter of pride that raised Odisha’s profile at the international level with the state being recognized for the first time as a major investment destination. The image of the state changed overnight.

In recent times more projects have come to the state and today Odisha is recognized as a favourable investment destination in various parts of the country. The state govermment, on its part, has been holding investment conclaves in major cities of the country, the last one having been held in Bangalore. Then the state had Make in Odisha conclave in Bhubaneswar, a huge success.

Efforts of the chief minister have drawn praise even from critics. For example, union finance minister Arun Jaitley had praised the state’s efforts in drawing investments and taking the state on the path of progress. It is pertinent to mention here that even Prime Minister, Narendra Modi had refrained from openly criticizing Naveen Patnaik and his government during his visits to the state.

Patnaik, thus, finds himself in a very strong position today and is unlikely to be rattled by the attacks of his opponents who seem to be opposing him for the heck of it. Their negative politics is likely to boomerang on them.