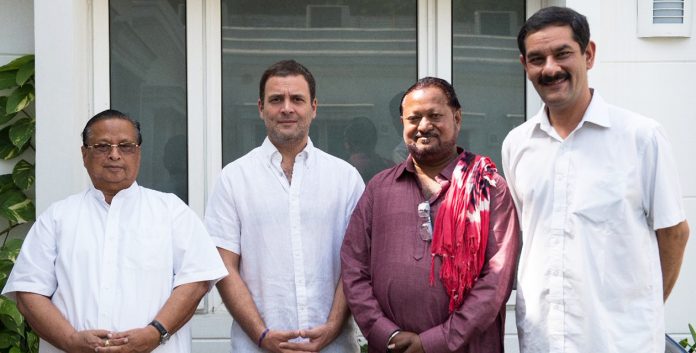 George Tirkey joined the Congress. The developement is likely to boost the prospects of the National party in Sundergarh in the 2019 elections. He is happy to have got a strong platform to fight the corrupt and inefficient Naveen Patnaik government on the one hand and the communal BJP on the other.

State Congress recently received a shot in the arm with veteran tribal leader and independent MLA from Birmitrapur, George Tirkey joining the Congress in a development that is likely to boost the prospects of the party in Sundergarh, his home district, in the 2019 elections.

George, who was first elected to the state assembly from Birmitrapur in 1995 on a Jharkhand Mukti Morcha (JMM) ticket, joined the Congress in New Delhi in the presence of AICC president, Rahul Gandhi, Odisha Pradesh Congress Committee (OPCC) chief, Niranjan Patnaik and party’s Odisha affairs in-charge, Jitendra Singh. Mahanadi Bachao Andolan convenor, Sudarshan Das and some of his followers also joined the party.

Talking to media persons after joining Congress George said he was happy to have got a strong platform to fight the corrupt and inefficient Naveen Patnaik government on the one hand and the communal BJP on the other. OPCC president, Niranjan Patnaik said George’s entry would further strengthen the party in the state.

State Congress working president, Pradeep Majhi also welcomed George into the party. “With him there we have a strong prospective candidate for the Sundergarh Lok Sabha seat,” said Majhi.

A former bank employee, George had won the Biramitrapur assembly seat in 1995 and 2000 on JMM ticket. In 2002 he joined the ruling BJD but after being denied a ticket by the party in 2004 he had unsuccessfully contested the Sundargarh Lok Sabha seat as an independent. In 2009 and 2014 he was elected from Birmitrapur as an Independent. One of the founder members of Samata Kranti Dal (SKD), a regional outfit that came into existence in 2013, George had returned back to  the JMM fold in December last year and was expected to contest the next election on its ticket.

However, while his sudden entry into the Congress comes as yet another proof that he has no qualms about changing loyalties his turncoat image has in no way affected his popularity in Birmitrapur, the tribal dominated constituency that is part of Sundergarh district. Sources said that George being a tribal and a Christian to boot would make an ideal Lok Sabha candidate for the Congress in Sundergarh as the constituency has a sizeable population of tribal Christians.

George’s entry into the Congress, however, is not good news for BJD which is likely to field former India hockey captain, Dilip Tirkey once again from Sundergarh which is presently being represented in the Lok Sabha by BJP veteran, Jual Oram. While the BJD is confident of defeating Oram in a direct contest if the Congress fields a strong candidate like George the contest will become truly triangular and make things easy for Oram.