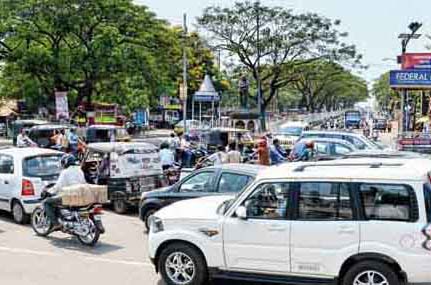 Traffic snarls have become the order of the day in the Smart City, where poor road engineering and mindless obstruction of roads is adding to the woes of common people.

From all appearances traffic management seems to be the last priority of the Commissionerate of Twin City Police. Complete chaos rules Bhubaneswar roads with traffic cops focussing more on harassing innocent people and extorting money in the name of ‘penalty’ than actually keeping the traffic flow smooth.

Traffic snarls have become the order of the day in the Capital City where poor road engineering and mindless obstruction of roads is adding to the woes of common people. While violation of traffic rules does take place what is more glaring is the indifference of traffic cops and their insensitive behaviour.

The chaos is all encompassing and all engulfing and can be seen on any stretch of the major thoroughfares in the city. While this happens traffic personnel, most of them young, are either seen huddled at the crossings or chatting on their mobile phones as hapless citizens struggle to get out of the jam due to unplanned traffic management. The student volunteers engaged to aid the traffic policemen are often clueless in absence of guidance from the person in-charge.

This is both surprising and disgusting and often makes one  wonder if the police officers in charge of the traffic control think their presence at the crossings is good enough to justify their duty even as there are violations all around them. There is no doubt that cityscape has undergone  a sea-change and the number of vehicles has gone up by leaps and bounds. And, the number of the traffic personnel engaged to control such a scenario in the city is woefully short.

Among the top police officers talk about the shortage in manpower in so far as traffic management is common but they refuse to see the other side of the picture. Some of the worst roads where the people in Bhubaneswar encounter such chaos in traffic management are KIIT Square to Jayadev Vihar, Jayadev Vihar to Rasulgarh, the stretch of Janpath from Vani Vihar to Rajmahal Square, AG Square to Kalpana Square and Rasulgarh to Rabi Talkies Square. Now even smaller junctions are becoming chaotic, thanks to the indifference of traffic cops.

Though brazen encroachments and unruly driving are also contributing factors there is no denying that things could have improved with more responsible behaviour on the part of traffic cops. What is pathetic is that the entire system accepts such gross mismanagements and violations of rules as a way of life in the city.

Come Assembly session and the busy Janpath turns into a zone of complete lawlessness as far as traffic management is concerned.  The Commissionerate of Police seems to have no plan for the vehicular traffic when protestors and rallyists lay siege to the Station Square and the entire stretch of Mahatma Gandhi Road. The police appear to be in no hurry to divert the traffic or to prepare alternative route charts to meet such situations even though they have the advance information of demonstrations, rallies and protests.

Despite having the social media at its disposal, no attempt is made to inform commuters in advance about the road stretches on which rallies and processions are permitted and suggest alternate routes for public convenience. More surprisingly despite having CCTV installed at most important junctions which are monitored from the control rooms, the Commissionerate Police makes no use of the surveillance to plan and control traffic. Chaos rules.