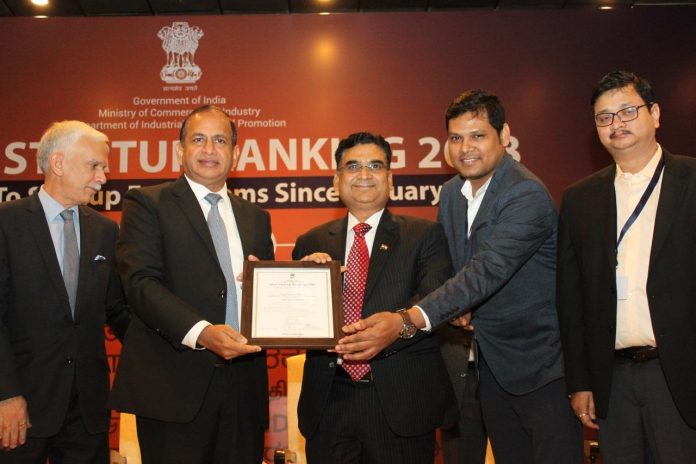 The Department of Industrial Policy and Promotion (DIPP) announced results of thefirst ever States’ Start-up Ranking 2018 at an event in New Delhi today. DIPP began this exercise from January, 2016.      States have been identified as leaders across various categories such as Start-up policy leaders, incubation hubs, seeding innovation, scaling innovation, regulatory change champions, procurement leaders, communication champions, North-Eastern leader, and hill state leader.            On the basis of performance in these categories, the States have been recognised as the Best Performer, Top Performers, Leaders, Aspiring Leaders, Emerging States and Beginners, as follows:

Fifty-one officers from States and Union Territories have been identified as “Champions”, who have made significant contributions towards developing their State’s Start-up ecosystem.

The key objective of the exercise was to encourage States and Union Territories to take proactive steps towards strengthening the Start-upecosystems in their states. The methodology has been aimed at creating a healthy competition among States to further learn, share and adopt good practices.

The entire exercise was conducted for capacity development and to further the spirit of cooperative federalism. Awareness workshops in all States, knowledge workshops in leading incubators, pairing of States for intensive mentoring, international exposure visits to US and Israel and intensive engagement between the States with Start-up India team, and video conferencing have helped many States initiate effective measures to support Start-ups.

DIPP consulted all stakeholders of the Start-up ecosystem and came up with 7 key reform areas as the basis of the States’ Start-upranking framework.An online portal was launched, which was instrumental in enabling States seamlessly submit their initiatives across these reform areas.

A total of 27 States and 3 Union Territories participated in the exercise. Evaluation committee comprising independent experts from the Start-up ecosystem assessed the responses across various parameters. Many parameters involved getting feedback from beneficiaries. More than 40,000 calls were made in 9 different languages to connect with beneficiaries to get a real pulse at the implementation levels.

A comprehensive National Report on the States’ Start-up Ranking 2018 was also released at the event today, detailing the journey of Start-up India, role of Central and State Governments, conceptualisation of the ranking framework, evaluation methodology, capacity development of States, assessment process, feedback from stakeholders, and the results of the exercise along with the impact it created on the states and the future road map.

The Secretary DIPP, Ramesh Abhishek, speaking on this occasion, said that start-ups are very important for the country as they create jobs and India resides in its states and start-ups with their innovative ideas will be able to solve social, agricultural and service sector problems of the country.

He further added that the ranking exercise has been an extremely enriching and educating experience for all the participants and has demonstrated the huge impact that can be made when Centre and States work together as Team India. These results are as much a recognition of the leading states as they are a celebration of efforts made by all the states for helping innovation and entrepreneurship across the length and breadth of the country