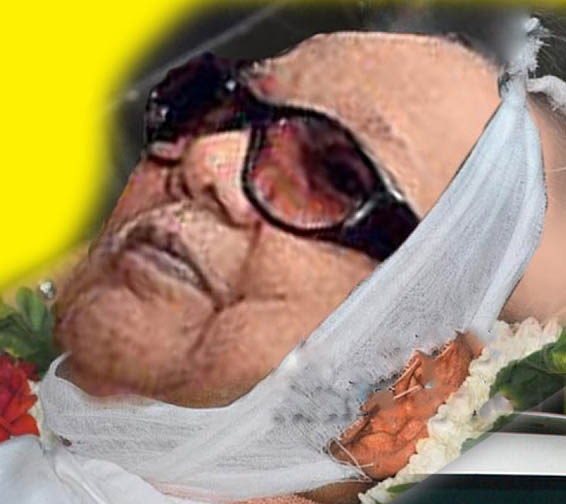 DMK Chief M. Karunanidhi passed away today at Chennai’s Kauvery Hospital at 6:10 pm. A medical bulletin has been released at 6.45 PM confirms the news.

Muthuvel Karunanidhi, former Tamil Nadu Chief Minister and president of the Dravida Munnetra Kazhagam (DMK), passed away at Kauvery Hospital, a private hospital in Chennai on August 7 after prolonged illness. He was 94.

The end came at 6.10 p.m., hours after the Kauvery Hospital announced that he was “extremely critical” and “unstable”. Karunanidhi was under treatment at the hospital after his health suffered a setback to his health past midnight on July 28. Before being moved to the hospital, the nonagenarian leader was suffering from fever and infection for the past few days and was treated round-the-clock by a team of doctors and nursing personnel at his Gopalapuram residence, Chennai.Karunanidhi fell ill in October 2016 due to a drug-induced allergy. The veteran leader was admitted to the hospital for “optimisation of nutrition and hydration” in the first week of December 2016 and later, for a throat and lung infection. He had undergone tracheostomy, a procedure to optimise breathing. Since then he was staying away from active politics and made only a few public appearances, the last one on June 3, 2018, when he turned 94.

Karunanidhi was born on June 3, 1924, at Thirukuvalai of Tamil Nadu. His father Muthuvel was a nagaswaram player and his mother Anjugam, a housewife. On July 28, the day he was moved to the hospital, he entered his 50th year as DMK president.

President Kovind twitted: “Extremely sad to learn of the passing of Thiru M. Karunanidhi. A doyen of our public life, as a contributor to the development of Tamil Nadu and of India he has few peers. Our country is poorer today. My condolences to his family and millions of well-wishers”. Prime Minster Narendra Modi twitted: “My thoughts are with the family and the countless supporters of Karunanidhi Ji in this hour of grief. India and particularly Tamil Nadu will miss him immensely. May his soul rest in peace.”