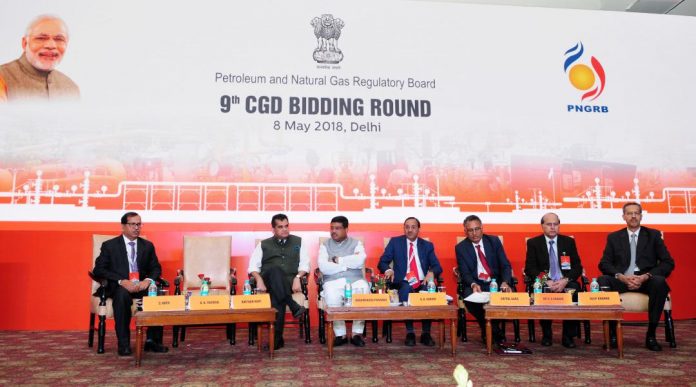 The Petroleum & Natural Gas and Skill Development Minister Shri Dharmendra Pradhan has said since May 2014, when our Government took over, we have doubled the coverage of CGD networks to 94 Geographical Areas spread across 130 districts.Natural Gas isthe fuel for the future and the need is to increase share of Gas in India’s primary energy basket from current 6.5% to 15%.Elaborating on this the Minister made it clear that till 2014, India had City Gas networks in 47 Geographical Areas across 73 districts.Through the 9th Bidding round, we are rolling out City Gas networks in another 86 GAs (Geographical Areas) covering 174 districts. After this round, India shall have CGD coverage in nearly 50% of the total 640 districts in the country and about 50% (61 Crore) of the population of the country.

Speaking at the ninth CGD Bid Round here today Pradhan said this is the largest ever round which covers 20 states and 2 UTs of the country.Bid process he said has been rationalized and investor-friendly parameters evolved to attract serious bidders, encourage competition and unreasonable parameters like amount of Bank Guarantee determining the winner have been removed.

The Minister underlined that reforms in Natural Gas sector in India are important and PNGRB is performing an important role in refining the gas usage model and even becoming a facilitator from a regulator. A Mini Gas Grid in North East connecting all state capitals being developed by a JV of 5 companies will cover 1,500 kms is also being developed. He said partnership with State Governments is needed and they should co-operate and support the CGD entities and the Ministry in making states pollution free.

Chairman PNGRB Shri D.K.Saraf in his presentation told that the current LNG Infrastructure is a bottleneck and needs to be stepped up from 26 MMTPA now to about 50 MMTPA by 2022. Saraf mentioned that the IXth CGD round covers 174 districts (156 full and 18 part districts),20 states,2 UTs and 29 percent of the country’s population.