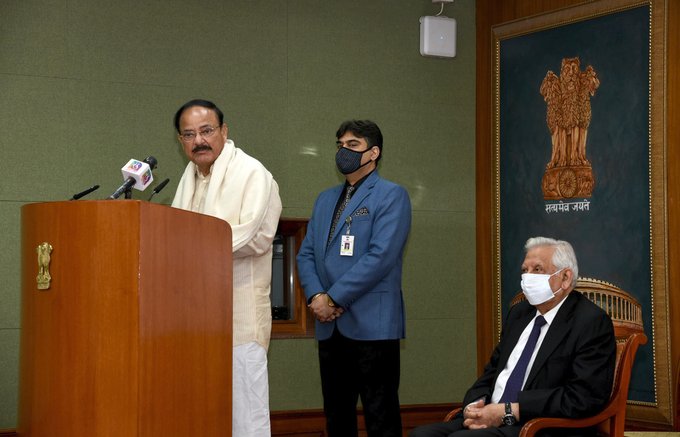 The Vice President, Shri M. Venkaiah Naidu, today called for a moral resurgence of civil services in the country to improve the delivery of services to the common man and to ensure the fruits of development reach the people.

In this regard, he urged zero tolerance towards corruption and ensuring total transparency and accountability at all levels of governance. Noting that corruption eats into the heart of the democracy, he stressed the need for stringent and timely action under the Prevention of Corruption Act (PCA) against erring civil servants and public representatives. He called for fast-tracking the high pendency of cases related to corruption involving public servants on priority.

At the same time, Shri Naidu cautioned that civil servants taking bona fide proactive actions are not discouraged or harassed. “While  corrupt civil servants must be strictly dealt with, we must not dissuade officials from taking bold decisions in the larger public interest”, he added.

The Vice President was speaking at the release of the book, ‘Public Service Ethics’ written by Shri Prabhat Kumar, former Governor of Jharkhand and former Cabinet Secretary to the Government of India, at Upa-Rashtrapati Nivas today. Shri Naidu observed that there is a general decline in the ethical values in society and called for a broad-based social movement for a ‘Naitik Bharat’ or ‘Ethical India’.

In this regard, Shri Naidu called for celebrating the achievements of honest civil servants and recognizing their contributions. This, he suggested, will not only be an incentive for younger officials to push for excellence, but such publicity will also encourage the replication of innovative efforts by others. He advised the media to highlight such contributions of local civil servants and encourage them.

Recalling his experience of working with enterprising civil servants, Shri Naidu noted that many young officers have been bringing innovation into their work, in programmes like Swachh Bharat.

Further, the Vice President also touched upon the importance of value-based training to all civil servants to ensure probity in public life. He said that professional ethics should be an integral component in all the training courses and called for a comprehensive Code of Ethics for civil servants, based on the recommendations of the 2nd Administrative Reforms Commission (ARC).

Enumerating the qualities of an ethical and public-spirited civil servant, the Vice President said an ideal officer should ensure zero pendency of issues in his purview, must display the highest qualities of probity and integrity in office, be proactive in taking the measures of the government to the people, and above all be sympathetic to the cause of marginalised sections.

Reflecting on the importance of ‘good institutions’ for ‘good governance’, Shri Naidu said there is a need to re-engineer our institutions and streamline the processes to cut down delays and ensure timely delivery of the services. He called for a greater use of IT to reduce human interface in services. Such processes will not only improve quality, but reduce discretion and conflict of interest of the serving officials, he noted.

The Vice President observed that governance models should change in line with the modern aspirations of our people, and that it is necessary to keep the bureaucratic system ‘light, transparent and agile’. He complimented the government for launching ‘Mission Karmayogi’ with an aim to build a citizen-centric and future-ready civil service for the nation.

Shri Naidu complimented the author of the book, Shri Prabhat Kumar and the publisher IC Centre for Governance for their efforts in bringing out the book. Appreciating Shri Kumar, he observed that there is a great scope for retired senior civil servants to share their rich experience and knowledge with young officers and contribute to the field of public policy.