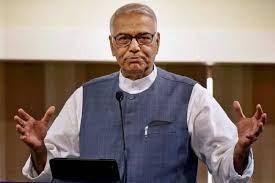 Yashwant Sinha-led ‘Concerned Citizens Group’ (CCG) report states that Kashmiris tend to think that the PDP was taken by surprise by the timing of the development as the chief minister was holding meetings at the state secretariat. Had Mehbooba known what was coming, they felt, she herself would have withdrawn support to pre-empt the BJP and gained political mileage.

Why did BJP decide to part ways with Mehbooba Mufti’s PDP in Jammu and Kashmir? There are bound be several versions for this important political development in an election year. But former union minister-turned-Modi baiter, Yashwant Sinha recently led a delegation to the valley that concluded that BJP’s decision to withdraw from the Mehbooba Mufti-led coalition government was part of a grand strategy of the national party with an eye on the 2019 general elections.
According to the report by Sinha-led Concerned Citizens Group (CCG) the majority of Kashmiris believe that the manner in which the BJP tripped the Mehbooba Mufti-led coalition government had little to do with the situation in the valley. It was more of a political move with an eye on the upcoming elections.
The criticism is bound to rile the BJP, more so because CCG has been engaging in informal talks with a cross section of society in Jammu and Kashmir. The report has generated the perception that the BJP perhaps felt that by going along with the PDP it might create an impression that it favoured secessionists which could be counter-productive in an election year. Besides, the situation in the valley could be used by the BJP to polarise the Indian polity and the electorate with dividends for the BJP. The Kashmiris, any way, feel that they have been reduced to a pawn in the larger politics of the BJP.
The CCG report states that Kashmiris tend to think that the PDP was taken by surprise by the timing of the development as the chief minister was holding meetings at the state secretariat. Had Mehbooba known what was coming, they felt, she herself would have withdrawn support to pre-empt the BJP and gained political mileage. At the same time the overall political and security situation in the Kashmir valley has not shown any indication of improving. While the general public sheds no tears over the collapse of the BJP-PDP alliance, it is also not enthused by the imposition of Governor’s rule. There is a sense of dejection and expectation of worse among the people.
The move was sudden and shocking and came at a time when people of Kashmir were expecting Prime Minister, Narendra Modi to take the peace initiative.But the move has left them confused and dejected. “The change of guard in Srinagar would make no difference. The political space in the valley has shrunk and along with it the prospect of a dialogue for peace has also become distant, the report said.
It said the most disturbing aspect of the present situation was that the Kashmiri youth was under nobody’s control.
Such was the sense of disempowerment and helplessness among the youngsters that not even parental control seemed to work on those intent on joining the ranks of militants,” the report, that is bound to stir a controversy, claimed. It also expressed alarm at the “glamorisation of violence” among the youth.
The overall message that seemed to go out was that Delhi either did not recognise the Kashmir issue as political or that even if it did, it did not want to do anything about it.