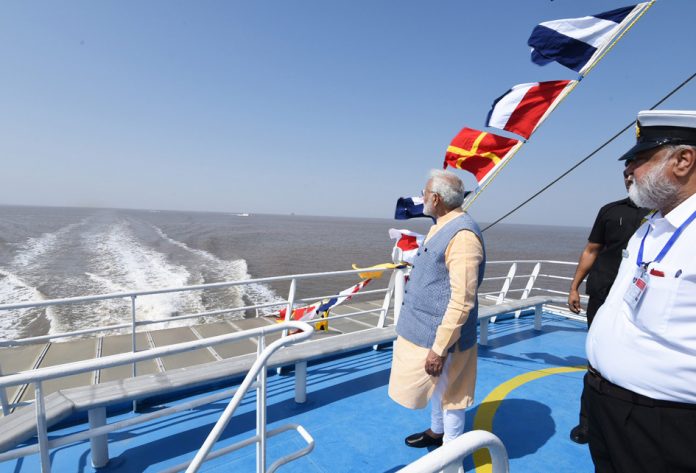 Prime Minister Narendra Modi’s launch of the first of its kind, state of the art Ro-Ro Ghogha-Dahej and subsequently Hazira project (in phase-2) marks the beginning of a radical transformation of the transportation and logistics sector in India. The logistic costs in India are extremely high and tapping the full potential of waterways will provide a huge impetus to movement of people, goods, commodities and vehicles. By reducing cost and time this will have an immensely beneficial impact on India’s manufacturing and exports. For example, the highly challenging infrastructure project of Ro-Ro ferry plying the Gulf of Khambhat between peninsular Saurashtra and South Gujarat will reduce the time of travel from 8 hours to a mere 1 hour and the distance would be reduced to 31 km from the current distance of 360 km. India has nearly 14,500 Km of navigable Inland Waterways and around 7,517 Km of coastline, which on being developed effectively for transportation purpose, shall help decongest roads and rail networks and offer multiplier effect to the overall economic development of regions. Coastal shipping and inland water transport are fuel efficient, environment friendly and cost effective modes of transportation, especially for bulk goods. Emissions from container vessels range from 32-36 g CO2 per ton-km while from heavy duty road transport vehicles it ranges from 51-91g CO2 per ton-km. Also the road transportation on average costs Rs. 1.5 per ton-km, for railways it is Rs. 1.0 per ton-km, for waterways it would be 25 to 30 paisa per ton-km only. One litre of fuel can move 24 ton-km cargo through road transport and 85 ton-km through rail transport, while it can move as much as much as 105 ton-km through water transport. These figures strengthen the assertion that waterway offers a much more economical and environmentally friendly mode of transportation vis-à-vis surface transportation. Country can save $50 billion per year if logistics costs reduce from 14 per cent to 9 per cent of GDP. Reduced logistics costs would in return bring down prices of products. Out of total stretch of navigable inland waterways in India, nearly 5,200 Km (36%) of major rivers and around 485 Km (3%) of canals are conducive to the movement of mechanized vessels. Inland waterways provide several advantages over rail and road transportation by virtue of their operational cost effectiveness (60-80% lower per ton-km), lower environmental impact, convenient interoperability and fewer issues in relation to land acquisition and infrastructure development. Currently only 4,500 Km of inland waterways is being commercially utilized and waterways carry less than 1% of domestic cargo in India. Government’s objective has been to develop and operate inland waterways transportation by working towards harnessing this tremendous potential under National Waterways Act 2016.For the holistic development of India’s coastline, the Government has launched ‘Sagarmala’ program in March 2015 and a National Perspective Plan (NPP) for the comprehensive development of India’s coastline has been prepared under it. Roll-on & Roll-off (“Ro-Ro”) waterways projects comprise of Ro-Ro ships/vessels which are designed to carry wheeled cargo, such as cars, trucks, semi-trailer trucks, trailers and railroad cars that are driven on and off the ship on their wheels or using a platform vehicle. It also comprises of jetties, with related port terminal and approach connectivity infrastructure. While passenger jetties are used solely to ferry passengers, Ro-Ro jetties have built-in or have shore-based ramps that allow the cargo to be efficiently rolled on and off the vessel when in port. The Ro-Ro project in Gujarat will be able to carry up to 100 vehicles (cars, buses and trucks) and 250 passengers between the two terminals. Historically with limited alternatives available road transport in the region has always been congested and packed. Also as the Ro-Ro ferry operator have proposed fares which are at par with prevalent bus fares, the facility shall provide the much needed respite to the passengers in the region. In India, various Ro-Ro projects in Assam, Gujarat, Karnataka, Maharashtra and Kerala have the potential to fully open-up the vast potential of India’s interior areas which have been geographically disadvantaged. Linking up with waterways will transform this disadvantage into a massive advantage. Most of these Ro-Ro projects in India are being implemented either on EPC mode, with operation and maintenance being undertaken by the State Government or, with more recent projects like the one in Maharashtra, on Public Private Partnership (DBFOT) mode with construction, along with operation and maintenance being undertaken by the private concessionaire. In view of the global competition for pricing of goods and the need to bring about social and economic prosperity to regions, it is imperative that the Government develops integrated and efficient modes of transportation system comprising of several layers, each of which needs to be developed in an vibrant and efficient manner. One such layer of transportation is waterways.

One of the key attributes of the investment in water based transportation is that, unlike many land-based transport systems which require complex land acquisition, rights-of-way, resettlement and other issues, the water based transportation project proposal is a relatively straightforward initiative. It also steers clear of many legal, regulatory, social and environmental issues which normally affect other transport projects. Further, under a PPP-DBFOT model the concessionaire receives berthing charges from ferry operators, and parking revenue at terminal. A Ro-Ro project in India, due to infrastructure constraints and overall population and economic growth, generates a project IRR in excess of 10% and is thereby financially viable on a standalone level. However, these projects have huge multiplier impact and should therefore be looked at from the perspective of economic and social rate of return. The State Governments can therefore consider awarding of new Ro-Ro projects to private parties on PPP-DBFOT model, while the existing operational projects can be awarded under PPP-Reverse-BOT model. Under a suitable PPP model, the Government retains the ownership and control of critical national infrastructure, while at the same time it reduces the financing burden on the Government and improves the operational efficiency of the asset. In green field projects the terminals need to be constructed by the government so as to make operations commercially feasible for private sector.

Ro-Ro services are also planned to be implemented by Indian Railways on rails too. Indian Railways is launching Ro-Ro service in Bihar for cargo vehicles and in Tripura for petro product. In all these Ro-Ro projects the Government is simultaneously also planning and preparing itself for provision of concrete bridge infrastructure in due course as and when the traffic volume justifies the investment. The latest, World Bank report 2016, on Logistic Performance Index (“LPI”), now ranks India at 35thposition as against 54th rank it occupied in the previous report published in early 2014. In order to improve on its LPI ranking further, provisions of integrated mobility across different modes are being prioritized. It is also proposed to adopt superior standard engineering consultancy services and a suitable model for project implementation in order to optimally allocate risks and rewards among the stakeholders. With this the government shall be able to increase the efficacy of transport project implementation across the nation. As the Prime Minister said this will reduce India’s dependence on import of diesel and petrol and take India to a new trajectory of growth. It will create over one crore job opportunities and give a boost to tourism and transport sector.pratisruti plus-November16-30-2017