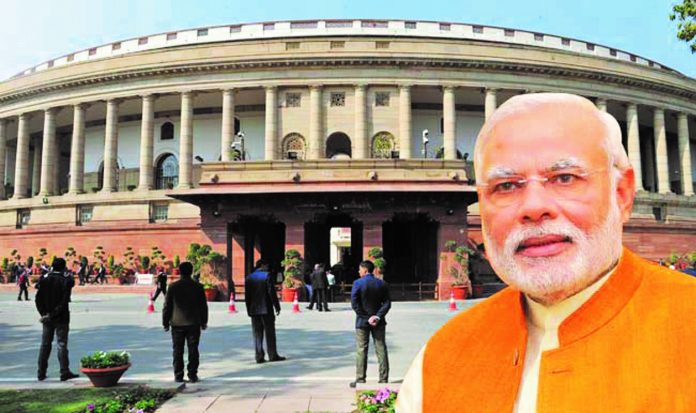 A triangular contest in the general elections suits Naveen as it ensures the division of votes of his rivals. Naveen is a master politician who always acted according to the situation.

Prime Minister, Narendra Modi has emerged stronger following the victory of the NDA candidate in the recent election to the office of Rajya Sabha deputy chairperson. One must credit the victory to Modi and his confidant, BJP president, Amit Shah’s man management skills.To begin with the decision to field a candidate from Janata Dal (United) was a master stroke as it showed the BJP’s willingness to accommodate its allies and through them it could win over support of parties such as the Biju Janata Dal (BJD) whose nine votes turned out to be the deciding factor in the end.

True that Prime Minister and Amit Shah both spoke to Odisha chief minister and BJD president, Naveen Patnaik seeking his support for NDA nominee, Harivansh Narayan Singh but what actually helped Naveen make up his mind was the call from Bihar chief minister and JD(U) supremo, Nitish Kumar with whom he not only enjoys a friendly equation but is also ideologically closer.

No wonder when the Congress trained its guns at Naveen for backing the NDA nominee in what appeared to be an open departure from his policy of maintaining equi-distance from both Congress and the BJP the BJD immediately defended itself saying that it had voted for a leader of JD(UO with which it shared a common ideology.

The party invoked Jay Prakash Narayan and argued that both BJD and JD(U) were born out of the erstwhile Janata Dal which thrived on its opposition to the Congress. There are, however, those who think that BJD’s move was part of Naveen’s larger strategy of keeping his rivals confused. This, according to political observers, may also help him buy temporary peace with BJP leaders who have mounted a sustained campaign against him.

“This is not the first time he has done it. His party had supported Ram Nath Kovind, the BJP candidate in the presidential election in July last year but a month later his MPs voted for the opposition-backed Gopal Krishna Gandhi in the election for the vice-president’s office. But this flip-flop, which often confuses his rivals, has in no way diminished his popularity,” said a seasoned political analyst.

Sources said Naveen was keenly aware of the fact that BJP was growing in the state having won 297 zila parishad seats in last year’s panchayat elections, a quantum leap from 36 in 2012. Hence, he does not want adversarial relations with its central leaders but at the same time he is keen to ensure that Congress, which is technically still the largest party in the state with 16 MLAs to BJP’s 10, remains a force. “A triangular contest in the general elections suits Naveen as it ensures the division of votes of his rivals,” said an observer adding that Odisha chief minister was a master politician who always acted according to the situation.

While state Congress leaders lambasted the chief minister for going alongwith the NDA in the Rajya Sabha deputy chairperson’s election the BJD sought to justify its stand asserting that it had voted for a JD (U) leader as the two parties shared a common political heritage and were inspired the JP movement. “Besides the Congress candidate had been critical of BJD and its government when he was in charge of state Congress affairs,” said a BJD release.

Union petroleum and natural gas minister, Dharmendra Pradhan, who is widely perceived to be BJP’s chief ministerial candidate in the next elections, also ruled out any possibility of an alliance between his party and the BJD in 2019. “We will contest the next polls on our own,” he averred.

However, irrespective of what stand the BJP and BJD take in 2019 there is no denying that Modi has come up with a master stroke by ensuring Naveen’s support for the his candidate in the Rajya Sabha. It is bound to boost his image as an astute politician