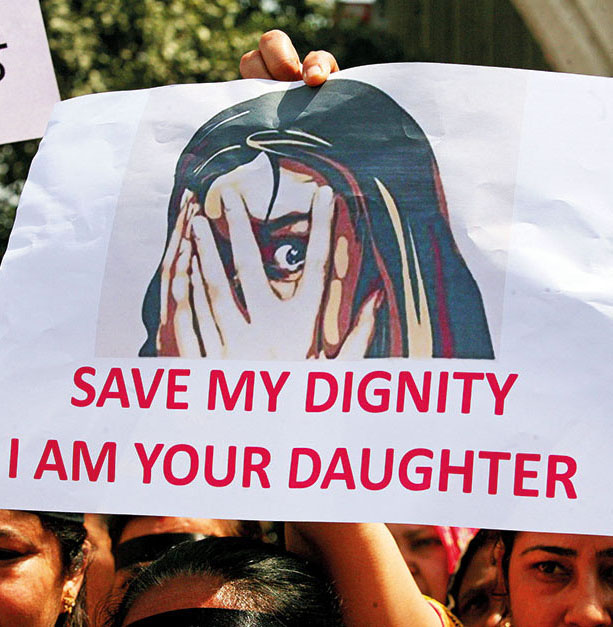 Haryana is ashamed, when a class XII student committed suicide after eight men raped her, four men gang raped another teenager, a 23-year-old pregnant woman was gang raped by three people, five miscreants abducted a 30-year-old woman from a mall and gang raped her in Delhi and a 19-year-old girl was gang raped by five men.

Haryana is one of the most prosperous states in the country. Basically an agrarian economy, it was among the first states to witness the Green Revolution, thanks to Bhakra Dam and Yamuna Command Network.

In the 1990s, after the economy opened up, huge investment poured into the state and Haryana got a big boost in real estate sector. Malls, market complexes, special economic zones and IT farms came up in the state, especially Gurgaon, one of India’s top three IT hubs and export earners. The state’s per capita income is also among the highest in the country.

However, though Haryana’s economy has grown by leaps and bounds, socially and culturally it is still caught in a time warp. Most of its population is still steeped in medieval patriarchy, which treats women like commodities. Khap panchayats rule the roost in most rural areas and their decisions are mostly biased against women and oppressed classes.

The state’s high crime graph against women reflects this environment. Though it has just 2% of India’s population, it has the dubious distinction of registering the highest number of gang rapes in the country. According to Haryana Police data, 70 cases of gang rapes have been registered in different police stations of the state till May this year. The National Crime Records Bureau figures reveal that a gang rape occurred every two days in 2016. On the other hand, according to NCRB, the same year a total of 1,187 cases of rapes were registered in the state – over three rapes a day.

Recently, the Haryana government tabled a detailed report on crime against women. It showed that since 2014, the crimes against women are consistently on the rise in the state. While the police registered 961 cases in 2014-15, it rose to 1,413 in 2017-18.

The figures expose the colossal failure in the system in tackling the crime against women, especially rapes. The perpetrators of crimes have scant respect for women – whether lower caste or upper caste, educated or uneducated – as well as law.

In April, a class XII student committed suicide after eight men from her village in Mewatgang raped her, while four men gang raped another teenager in Yamunanagar district. In May, a 23-year-old pregnant woman was gang raped in Manesar by three people, while five miscreants abducted a 30-year-old woman from a mall in Gurugram and gang raped her in Delhi. The same month, a 19-year-old girl was gang raped by five men.

But the law and order situation is so bad that arresting the accused persons is not a deterrent against the crime. In most cases, even if FIRs are lodged and accused are arrested, they are acquitted because the victims’ families are pressurized by the community to withdraw the cases.

Even for the politicians or police ensuring punishment to the perpetrators of the crimes is not a priority. Instead, politicians make bizarre comments during such times. Take the recent case of the gang rape of a 19-year-old girl in Rewari district in the state. The girl is brilliant in academics and had topped the CBSE examination.

In another state, she would have earned the respect of her community. But on September 12, she was abducted by few youth known to her when she was on her way to a coaching class, taken to a secluded place and gang raped. After she was rescued, the police initially did not register a case. The family of the victim were even turned away by the district superintendent of police. It was after the case was highlighted in media that the police lodged an FIR.

Even as the police started searching for the accused, an MLA of the ruling BJP, Premlata Singh, made an insensitive comment saying that crimes like rapes were happening because of the “frustration” among unemployed youth. Chief minister M.L. Khattar went a step further. He talked about “different kinds” of rapes. He even chided a reporter for asking questions about the rape when he was at the “Swachh Bharat” function.

Sociologists say such insensitive attitude of men towards crime against women stems from the highly patriarchal society of Haryana. This reflects in rampant female infanticide and the skewed sex ratio of 914 female per 1,000 male in the state. The women’s status is quite low in the community and they are seen as sex objects, they say. According to police, it has often been seen that a youth known to the victim or even her boyfriend abducts her to rape her along with others. And they get scot free because the community’s pressure is on the victim and her family.

One of the Modi government’s most ambitious programmes, Beti Bachao, Beti Padhao, was launched in Haryana, probably to alleviate the status of women in the state. But, obviously, nothing has changed. Concerned about the growing rape incidents, Haryana’s pride and one of India’s top women wrestlers, Babita Phogat, says that the government should urgently need to launch a programme, “beton ko padhao, beton ko samjhao” (educate the boys and make them learn), to change the outlook of the men in the state.