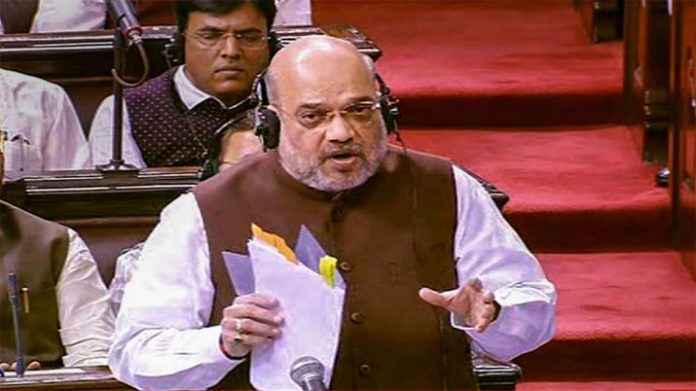 Announcing a path breaking decision by the Government, Shri Shah said that the Government is moving a resolution which would repeal the provisions under Article 370 of the Constitution of India,which granted a special status to the state of J&K. The provisions of Article 370 would cease to exist from the date President of India issues a notification in this regard, after the recommendation of the Parliament. Consequently, the Constitution of India would get applicable to J&K, on par with other states/UTs of the country, the Minister added.

Responding to apprehensions on the resolution and the future of J&K,Shri Shah said,“I would just say that the bill that the Government is bringing is historic. Article 370 has prevented J&K to merge with India rather than being a basis of its merger. The politics of vote bank has looted the youth of the state for over 70 years. I would call on the opposition members to debate and discuss on why the benefits of development were not allowed to reach the common people of J&K till now. Politics of religion must be avoided at all costs. Article 370 is equally harmful for people of all religions”, the Minister said.

Further, the Minister termed the provisions of Article 370 as discriminatory on the basis of gender, class, caste and place of origin. The youth is being taken for a ride by the political elite. This provision was temporary in the first place and it has to go in the larger interest of the people of J&K, he added.Under article 370(3), there is a provision that President, on recommendation of the Parliament, has the power to amend or cease the implementation of article 370,through a public notification. This has already happened on a number of occasions in the past. The Home Minister pointed out to the opposition that everyone knows how the article 370 is hampering the development of the people of the state.

Shri Shah said that post the repeal of the Article 370, doors to private investment in J&K would be opened, which would in turn increase the potential for development there. Increased investments would lead to increased job creation and further betterment of socio-economic infrastructure in the state. Opening of buying of lands would bring in investments from private individuals and multinational companies and give a boost to the local economy, as opposed to the apprehensions raised by those opposing this historic step, he added.Home Minister remembered the martyrdom of civilians and soldiers who have lost their lives during 1989-2018. He said that had article 370 would not been there, these people wouldn’t have lost their lives. Refugees who came from Pakistan after partition did not get citizenship till now. They cannot become councillors in the state. This has been a historical injustice to these people. As opposed to this, in rest of India two Prime Ministers were elected from those refugees.

Shri Shah said because of article 370, democracy never took root in J&K, corruption flourished, widespread poverty took root and no socio-economic infrastructure could come up. It is the root cause of terrorism. Further, 73rdand 74thAmendments to the Constitution could not be applied to J&K due to article 370. Panchayat and Nagar Palika elections could not be held. Who is responsible for taking away democratic rights of the people of J&K which were available to other citizens of India? It was Article 370.Panchayat elections recently held were conducted successfully and peacefully. The people want democracy and not bloodshed., the Minister said.

Talking about economic backwardness in J&K, Shri Shah said article 370 impedes people from outside the state to do business there. Absence of economic competition has prevented development and corruption flourished.Land prices are at a rock bottom because no one can buy land there. No industry, including tourism, is allowed to flourish there. People remain poor in perpetuity despite presence of abundant economic opportunities for the local populace. Rampant corruption is present, thus preventing external investment in the state.

Home Minister said, “I want to tell the Kashmiri youth that article 370 holds no benefits for them. It would only benefit a few elite people who want to keep the youth poor for ever and corner all benefits for themselves. Despite so much funds being provided by the Centre, where are the educational and health facilities? Those who support article 370 must know that this article prevents professionals from outside the state to settle down in the state and hence no one wants to go there. Now, the moment this resolution is passed and article 370 is removed, each child would get right of education and each patient would get free health care under Ayushman Bharat.”

Further addressing the Kashmiri youth, Home Minister said, “We want to embrace the youth of J&K and give them flourishing opportunities of employment. Even the separate bill for reservation for economically backward classes would not be required if the resolution is passed in both houses as the provision will get automatically applied to J&K, as in rest of India”.Talking about terrorism, Shri Shah said that the youth has been misguided to pursue jihad on Pakistan’s nefarious designs. Thousands of civilians have died. Why? It has been a stated policy of Pakistan to support article 370 and keep the youth away from getting into the mainstream of development and brain wash them into jihad. All the political parties with separatist ideology have vested interests to continue article 370. Their children do not get killed in the blood shed caused due to terrorism, hence support the article.

Rebutting the apprehension that removing article 370 would destroy Kashmiri culture, Shri Shah said that all states have preserved their culture and language after becoming a part of the Union of India. How does article 370 protect JK on this aspect, he asked. It is only and only a political propaganda that has blinded the youth of Kashmir into believing it for 70 years.“I assure the youth of JK that give this government 5 year and it will become the most progressive region in the country”, the Minister said.Daughters of the state marrying outside the state lose their rights to property. It is so discriminatory to the women and their children. SC and ST people have been discriminated against and have been deprived of reservation to political offices. Despite knowing this a few people have been perpetuating this article only for their political gains, the Minister said.

Shri Shah assured the House that if the Union Territory model works well, our government would also consider giving J&K the status of state again. No constitutional amendment would be required.

J&K would become a true part of India in letter and spirit once article 370 is removed. The path to solution to all the problems of Kashmir goes through the repealing of article 370. This step would stand strong and would pass the test of legal scrutiny. Article 370was a temporary and transient provision, it had to go. It only required political will, which only the present government had. “I give a heartfelt appeal to all political parties to rise above political considerations to join hand with the government to remove article 370. The country wants this united as one”, the Minister concluded, after which all the resolutions and bills relating to J&K were passed.

Shri Amit Shah also introduced the Jammu and Kashmir (Reorganisation) Bill, 2019 making Jammu & Kashmir a Union territory with a Legislative Assembly,along with Union Territory status to Ladakh without a Legislative Assembly. Further, the Jammu & Kashmir Reservation (2nd Amendment) Bill, 2019 to amend the Jammu & Kashmir Reservation Act 2004 was also introduced. This bill seeks to extend the 10% quota to economically weaker sections of society in J&K in jobs and educational institutions. Both the bills were passed by Rajya Sabha unanimously.