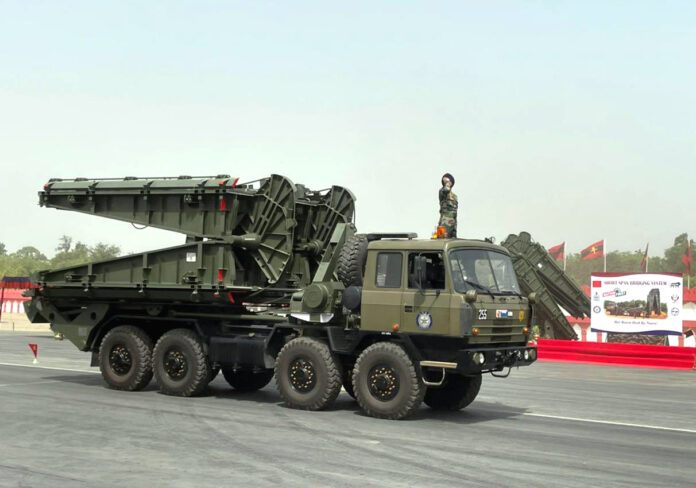 The first production lot of 12 Short Span Bridging System (SSBS)-10 m, designed and developed by Defence Research and Development Organisation (DRDO), has been inducted into Indian Army by Chief of the Army Staff General MM Naravane during a ceremony held at Cariappa Parade Ground, Delhi Cantt. on July 02, 2021. Secretary Department of Defence R&D and Chairman DRDO Dr G Satheesh Reddy was present on the occasion.

The SSBS-10 m plays a crucial role of bridging the gaps up to 9.5 m as a single span providing a 4 m wide, fully decked roadway, ensuring faster movement of the troops. Research & Development Establishment (Engrs) Pune, a premier engineering laboratory of DRDO, has designed and developed the system in association with M/s L&T Ltd. The 12 bridges are part of 102 SSBS-10 m from M/s L&T Ltd, which is the production agency.

The Project Short Span Bridging System involved the development of two prototypes of 5 m SSBS on Tatra 6×6 chassis and another two prototypes of 10 m SSBS on Tatra 8×8 re-engineered chassis. Both the systems have undergone rigorous Directorate General of Quality Assurance (DGQA), MET and User trials and after successful completion of all the trials, the systems were recommended for induction into the services. This bridging system is compatible with Sarvatra Bridging System (75 m), where the last span requires covering gaps less than 9.5 m. The deployed bridge is of the load classification of MLC 70. The system will help in quick movement of troops and enhance the mobilization of resources.

Raksha Mantri Shri Rajnath Singh has congratulated DRDO, Indian Army and the Industry on the successful development and induction of the system. He stated that this induction will give a boost to the fast-growing Indian defence industrial ecosystem and help the industry to contribute towards ‘Atmanirbhar Bharat’. Chairman DRDO Dr G Satheesh Reddy congratulated the teams involved in the successful development and induction of this bridging system into the Indian Army.