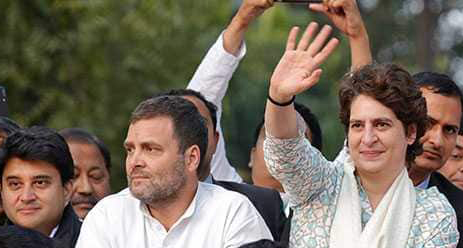 Priyanka’s entry was not unexpected. The party, with its fortunes down, was looking for someone who could reverse its fortunes in UP which accounts for 80 Lok Sabha seats. Her entry had enthused cadres of the party.

Recently we saw Priyanka Gandhi Vadra, the sister of AICC president, Rahul Gandhi, being formally inducted into the Congress. She was given the responsibility of the crucial eastern UP belt. The move caused ripples across the country and now every move of Priyanka is being closely watched.

It is not that her entry was not expected. The party, with its fortunes down, was looking for someone who could reverse its fortunes in UP which accounts for 80 Lok Sabha seats. It had enthused cadres of the party.

Comparisons are already being drawn with her grandmother, former Prime Minister, Indira Gandhi. The success of her recent road-show in Lucknow is being cited as an example of her popularity. But there is a big question – does Priyanka has the ability to carry out the responsibility.

She is no stranger to UP politics but her role in the heartland state has so far been limited to taking care of the family boroughs of Amethi and Rae Bareli. She is familiar with that landscape and knows most of the Congress workers in the twin constituencies personally.

But eastern UP is a vast territory. It accounts for almost 19 districts and accounts of 26 of the 80 Lok Sabha seats in the state. It includes Varanasi, the constituency of Prime Minister, Narendra Modi and Gorakhpur, the erstwhile Lok Sabha seat of chief minister, Yogi Adityanath.

The new Congress general secretary has taken up the challenge at a time when old enemies Samajwadi Party and Bahujan Samaj Party, the two major players in UP’s politics, have decided to bury the hatchet  in a bid to trump the BJP which had won a record 71 Lok Sabha seats in the state in 2014.  However, much to the chagrin of Congress the new allies have kept the Grand Old party out of their scheme of things. Adding insult to the injury they have left Congress just two seats – Amethi and Rae Bareli, the old family fiefs.

More than the importance of fighting the Narendra Modi-led BJP it was this affront that spurred the Congress into action in Uttar Pradesh, the state which used to be the party’s stronghold till the 80s. Priyanka’s anointment was announced promptly and the party also made it clear that it would contest all the 80 seats in the state where it had come up with one of its worst performances in 2014 managing to win just two seats – Rae Bareli and Amethi.

The message that is being given out is that Congress can fight on its own in UP where it hopes to stage a comeback. By giving Priyanka the charge of eastern UP it has taken a big gamble. She is the ultimate weapon that the party had only been talking about so far, in the process creating an aura of mystique around her but never used. This weapon has to hit home if Congress has to reverse its fortunes.