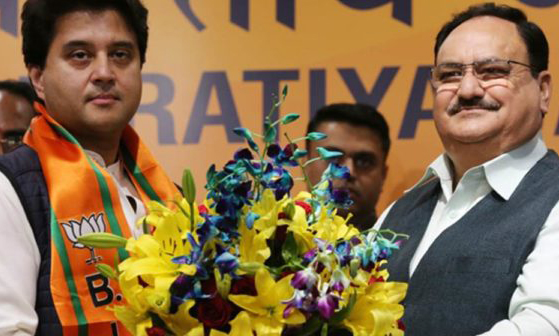 Jyotiraditya Scindia has joined the BJP breaking his old ties with the Congress. Now the entire Scindia clan is within the saffron fold. Scindias not only enjoy a lot of respect in Madhya Pradesh they also have tremendous resources at their disposal.

Congress seems to be going from bad to worse. The latest political drama unfolding in Madhya Pradesh has an ominous message for the party—that it is going to be further marginalised in the politics of the country. Not only the fate of Kamal Nath government but also that of the party hangs in the balance.

The other focal point of the MP drama is Jyotiraditya Scindia who joined the BJP breaking his old ties with the Congress. Now the entire Scindia clan is within the saffron fold. As he was being welcomed into the party he recalled two important dates in his life, September 30, 2001, when he lost his father, Madhavrao Scindia, and the latter’s 75th birth anniversary, March 10, 2020, when he decided to quit the Congress.

He lambasted the Congress for losing touch with the ground realities of the country and deviating from its professed commitment to the development of India. He also accused the party government in Madhya Pradesh, his home state, of failing the people.

In contrast Scindia was all praise for BJP and its top mascot, Prime Minister, Narendra Modi who enjoyed the faith and support of the people. The leader said that Modi had demonstrated both the resolve and the capacity to bring to fruition pro-people schemes aimed at country’s growth and development.

In a way history seems to be repeating itself. Jyotiraditya’s grandmother Vijaya Raje, the last Maharani, later Rajmata, of Gwalior entered politics 10 years after independence in 1957, winning the Guna Lok Sabha seat as a Congress candidate. She won again from Gwalior in 1962 on a Congress ticket. But in 1967, she resigned from the Congress. She joined the Swatantra Party, returning to Guna to win her third term in the Lok Sabha.

As of now Scindia has been offered a Rajya Sabha seat and is likely to play a role in Central politics. But he definitely has his ambitions and would like to realise those. Congress did not offer him that opportunity. He would like to seek the fruition of those ambitions in the BJP.

Now with three powerful Scindias in the same party, Jyotiraditya and his two aunts, Vasundhara Raje, twice CM of Rajasthan and Yashodhara Raje currently Madhya Pradesh MLA from Shivpuri, the Scindia clan’s clout is at its peak. Scindias not only enjoy a lot of respect in Madhya Pradesh they also have tremendous resources at their disposal. It remains to be seen if the clan can realize its political ambitions with unity becoming an important factor for it. It will also be interesting to see if the clan will now be led by young Jyotiraditya.