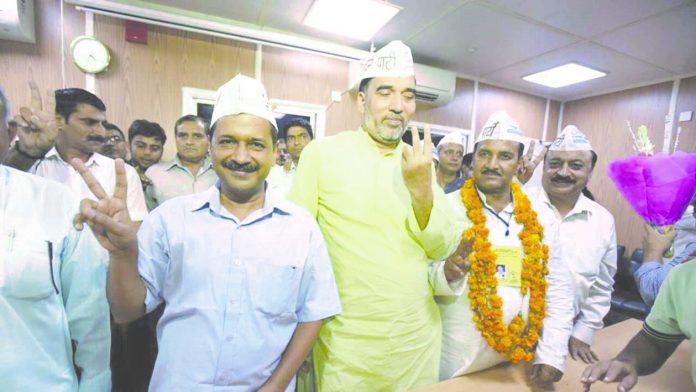 The biggest blow to Bharatiya Janata Party (BJP) has been the outcome of the result in the Bawana by-elections which went in favour of the Aam Aadmi Party (AAP). The Bawana victory was AAP’s first after a series of setbacks including the turmoil within the party with some stalwarts parting ways.

Of late there has been some bad news for the BJP and the Modi-led NDA government at the Centre. The biggest blow to the party has been the outcome of the result in the Bawana by-elections which went in favour of the Aam Aadmi Party (AAP). The victory margin of AAP’s Ram Chander – 24,000 – was significant.

The by-poll result has implications for all the three major contenders including the Congress which is yet to show signs of recovery in Delhi where it once ruled. For AAP the result means it has retrieved some of its lost glory and base. But BJP seems to be the biggest loser.

The outcome came as a big relief for Delhi Chief Minister Arvind Kejriwal and his AAP. Not only has the party’s tally in the 70-member Delhi Assembly gone up to 66 just one less than what it had won in the 2015 state elections the result signifies a personal victory for Kejriwal who was facing criticism from several quarters.

The Bawana victory was AAP’s first after a series of setbacks including the turmoil within the party with some stalwarts parting ways. The biggest blow to the party was its loss in the much-hyped Punjab and Goa Assembly elections in March this year. Then it lost a by-poll in Delhi and in the MCD elections as well.

The loss on the Rajouri Garden seat in a by-election was an acute embarrassment for the party since it had won the seat in 2015 assembly elections. The seat fell vacant when AAP’s Jarnail Singh resigned to contest the Punjab Assembly elections. Akali Dal’s Manjinder Singh Sirsa, who contested on a BJP ticket, won the by-election. The Congress was placed second on the seat and the AAP candidate, in a major embarrassment, forfeited his deposit.

Then came the loss in the MCD elections where the party was placed second behind the BJP. Kejriwal changed his strategy after these setbacks. While he kept a low profile he stepped up his interactions with the people of Delhi.

The move seems to have paid off and AAP’s confidence is back. For the BJP, though, the loss in the by-poll is a big embarrassment as it clearly reflects on its popularity in a place which is considered the heart of the country and the seat of power.

There have been other setbacks for party as well. Like the situation at the Gorakhpur hospital where several children died continues to be as bad as it was. Initially the deaths were attributed to the stoppage of supply of oxygen cylinders to the hospital which had allegedly not cleared the dues of the supplier.

As the issue triggered a nationwide hue and cry the Adiyanath Yogi-led government denied this and promised to put things in order. Nothing of the kind has, however, happened so far despite concern expressed over these deaths even by the central government.

BJP’s image in UP has taken a serious beating since the hospital falls within the ambit what was once the Lok Sabha constituency of the present chief minister. The opposition, specially the Congress is set to gain from this.