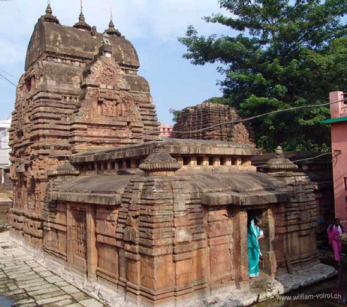 The Sisireswar temple at Bhubaneswar is an important landmark in the evolution of temple architecture. It consists of the deula (now devoid of its crowning members and the upper part of the gandi) and a rectangular Jagamohana The deula, though similar in form to that of the Parasurameswar, is clearly pancharatha on plan. The similarity of the structural form shows the continuity of the earlier tradition, but the developed pancharatha pattern shows the progress of the style. The rectangular Jagamohana with the terraced roof is similar to that of Parasurameswar, but at the same time it is an improvement over the earlier technique. The Jagamohana of Sisireswar has no windows, it has not pillars inside and the roof is built according to the cantilever principle. The vertical face of the sloping eaves are relieved with friezes, of which military processions form the dominant theme. The niches in the central projection of the deula are adorned with images of Ganesa, Kartikeya and an eight-armed Mahisamardini.

In architectural form the deul, together with the rectangular Jagamohana, approzximates to that of the Parasuramesvara temple, but in decorative details it is closely related to the Vaital Deul its figures being equally remarkable for their fine workmanship and sensitive modeling (e.g. Nataraja within the medallion of the upper chaitya-window on the frontal raha). Its pabhaga consists of four decorated mouldings as in the Vaital Deul.

All the images of parsva-devatas-the four-armed Ganesa, the two-armed Karttikeya and ‘the eight-armed Mahishasurarnardini-are intact in their respective niches of the central projections of the bada The niches on either sicte of the central projections have different forms of Siva including Aja­Ekapada and such composite forms as Ardhanarisvara and Hari-Hara, while those of the kanika contain kanyas.

The decoration of the door-frame is particularly attractive. In addition to the usual decorative bands of scroll-work and floral motifs, simlar to those on the Vaital Deul, two facets of the jambs have each at the bottom a naga-figure holding a foliated puma-ghata, the symbol of plenty and prosperity and a four-armed Saiva guard.

The vertical face of the sloping eaves of the Jagamohana on the south and east sides is relieved with war-scenes, the corresponding space on the north side having a frieze of elephants and lions. The outer body is divided into several broad compartments filled with sculptures, of which the figure of Lakulisa, seated cross-legged, in the central niche of the south side is most interesting, The dharmachakra-pravartana-mudra of its front two hands and the treatment of its pedestal, consisting of a stylized tri-ratna flanked by a deer and naga, are distinctly Buddhist in inspiration. A damaged figure with a canopy of serpent-hoods and holding a vase in his left and and a rosary in his right, to the right of the niche containing Lakulisa, has its counterpart in one of the images carved on the north inner wall of the deul of the Vaital. Among other figures is noteworthy a relief of Kamadeva in the company of two females.         On the floor of the Jagamohana lies a ten-armed image of Mahishasuramardini, carved in high relief and bearing a close similarity to the figure on the northern niche of the Vaital Deul.

A duplicate of the Sisiresvara temple, «is situated near the south-west comer of Bindu-sarovara                                  The deul (ht. 9.45m.) is well-preserved, but the Jagamohana is entirely modern, though built after the original one. The decoration of the door-frame is slightly different from that of the Sisiresvara temple, for we have here the figures of eight grahas (Ketu being absent) on the projected architrave over the lintel containing a seated figure of Parvati; the jambs are divided into three vertical compartments, of which those on the left from bottom upwards are a Saiva duara-pala (door-keepeer), the four-armed Brahama and the two-armed Agni; the central figure on the right jamb is damaged, the other two being the dvara-pala and Varuna holding a noose in his left hand.

Like the Sisiresvara temple, the facade of this temple is dominated by a chaitya-window containing a ten-armed figure of Nataraja of neat workmanship. The niches of the central projections contain images of Ganesam, Karttikeya and Parvati, the last devoid of ornaments and wearing a jata­ mukuta The comer-niches have different forms of Siva inclutlmg Aja-Ekapada and Ardhanarisvara Of the the divine figures, mention may be made of the four-armed Mahishasuramardini on the northern raha. The recessed kanthi, demarcating the gandi from the IJada, is relievced with various themes, both moundane and divine, like amorous figures, inebriate man, doorkeepers leaning against their staff, worship of the linga, homage of Brahma to Siva, etc.

This temple is closely related to the sisiresvara temple and may also be assigned to the 8th century. Like the temples of the early group, the deula has a low sikhara, the gandi is demarcated from the bada by a recessed kanti, while the eight planets over the lintel of the door is another early feature found on this temple. The style of decoration, with a chaitya window containing Nataraja on the front facade of the raha, and different forms of Siva in the niches of the temple, are akin to those of the Sisireswar temple. However, the door frame is different from that of the Sisireswar, the walls adjoining the doorjambs have been divided into compartments and embellished by figures of Brahma, Agni, Varuna, etc., which is a rare feature bespeaking of the freedom of the artist during this creative period.

The rectangular jagamohana of this temple has been thoroughly repaired, but originally it had a roof built on the cantilever principle. Besides these two temples, the vaital temple at Bhubaneswar can be regarged as belonging to this phase of architectural evolution.