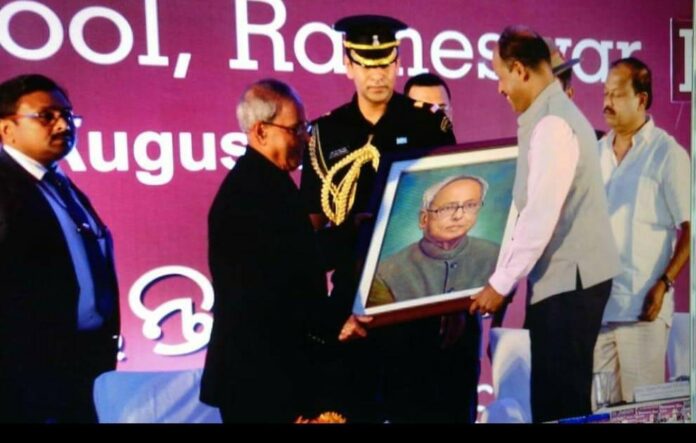 Pranabda missed the golden opportunity to become Prime Minister of India. The first time in 1984 and the second time in 2009 tells us something about how long a political career this remarkable man had. And about how much time he spent near the very pinnacle of our political system.

It was 7th August 2015. It will give me satisfaction that the then President of India attended the Golden Jubilee Celebration of a rural high school in Odisha. It was the 1st of its kind experience of any rural school in the country. Shri Pranab Mukherjee attended the Celebration and planted a sapling in the School Campus. Thereafter, every year on 7th August the alumni of this High School assemble near the growing sappling and celebrate the day as ‘Commemoration of President’s Visit to the School’.  They write a letter every year to Pranabda at his 10, Rajaji Marg, New Delhi address.

I drafted all the letters, at the request of my friend Shri Biswamohan Patnaik, since we planned commemorating Golden Jubillee of his High School at Rameswar in Khordha district. Thereafter, without expecting a reply, we submit a report every year. I reproduce a part of the letter sent on 8th August 2020:

“ ……The Bakula sapling, which was planted by you has in the meantime attained 6 years of age. We are enclosing herewith the photographs of the plant as on August 2020 for your recollection and pleasure viewing. We are taking care of all the plants in the School Campus, which will continue to inspire the students of this great school. For all the time to come, the students shall feel proud that Hon’ble President of India had visited their School on 7th August 2015. The Bakul Tree, is the living memoire – which will proudly pronounce the blessings and goodwill of the 1st Citizen of our great country through its protective canopy, fragrance from its innumerable flowers and sweet fruits.

You have seen people organize huge functions, better than what we arranged at Rameswar; but they rarely celebrate and take pride and recollect the presence of Hon’ble President’s visit by arranging commemoration functions, as we did on 7th August 2016, 2017, 2018, 2019 and 2020. 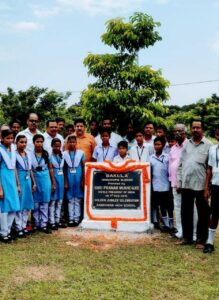 We express our sincere thanks to you for giving us an opportunity to witness, hear and get inspired with your inspiring speech and gracious presence; which we shall celebrate as the ‘Commemoration of President’s Visit to the School’ every year to keep our memory fresh and alive. …..”.

Pranab Mukherjee is no more. He has passed away few hours from now in the evening hours of August 31. He was a good friend of Janaki Ballav Patnaik, the former Chief Minister of Odisha. Pranabda obliged us to attend the Golden Jubillee as he promised his good friend. But when he came, his friend had left for heavenly abode. Although Suvra Mukherjee, the wife of Pranabda, was unwell, he came to Rameswar just to fulfill the promises he made to Janaki babu. He had to return to New Delhi as in the evening as Suvra was hospitalized. She left Pranabda 3 days after on August 18, 2015.

I remember, twice in past, Pranabda missed the golden opportunity to become Prime Minister of India. The first time in 1984 and the second time in 2009 tells us something about how long a political career this remarkable man had. And about how much time he spent near the very pinnacle of our political system.

Pranabda was an extraordinary politician, capable of feats of memory outpacing computers. On nearly every subject he dealt with, from Finance to Foreign Policy to Parliamentary Procedure, he was an expert. He was capable of gentle humanity and great humility. And yet he was short-tempered, could be unnecessarily stubborn and often lost his shirt needlessly.When Indira Gandhi was shot dead on October 31, 1984, Pranabda was in Kolkata. So, by some coincidence, was Rajiv Gandhi. A special flight was organized to take Rajiv, Mukherjee and various others back to Delhi.

Pranab was Number Two in the cabinet. It was his job to hold the fort till the succession was sorted out. There were precedents. Gulzarilal Nanda had twice functioned as a stop gap after the deaths of Jawaharlal Nehru and Lal Bahadur Shastri. He went to the cockpit of the special flight and sent a message through the pilot’s radio that the three service chiefs were to come to the airport to meet him along with the Cabinet Secretary. His motive was purely practical. But his pragmatic action nearly cost him his political future. Rajiv and his aides noticed that the officials had all turned up at the airport to take orders from Pranabda and began to wonder if he was getting ready to take over.

The scenario during 2009 was that Congress would form the government under Pranab Mukherjee, not Manmohan. The Left would support this government. Manmohan would become an elder statesman and possibly, President of India, once the office fell vacant. Against the odds, however, the Congress did substantially better in 2009 than it had in 2004. It no longer needed the Left and Manmohan Singh continued as Prime Minister. Ironically, it was Pranab who later became President of India. No politician can complain about ending his career as President. But Pranabda would have preferred to be Prime Minister.

He was one of our most competent politicians with a career that spanned two centuries. It is a pity – for him and for India – that he never got to be Prime Minister. Janaki babu also preferred to be the Chief Minister of Odisha than becoming Governor of Assam. But both the friends, known to be very voracious readers and literatures, never could reach their cherished positions, although both of them were most suitable.

The Bakul Tree, the living memoire of Pranabda, proudly pronounces his blessings and goodwill through its protective canopy, fragrance from its innumerable flowers and sweet fruits.