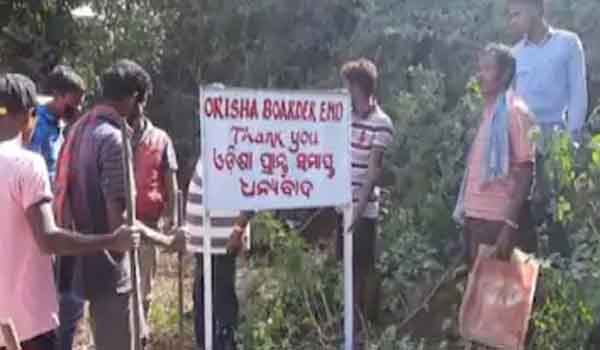 Andhra Pradesh sponsored anti-social elements took advantage of the cyclone ‘Gulab’ and crossed over to Kotia villages, putting up two signboards in Telugu, to establish their ownership over the villages and to draw a new state boundary. Odia language is also being given step-motherly treatment in Andhra Pradesh and Jharkhand.

Telugu signages have cropped up in Kotia panchayat area of Odisha, which are claimed by Andhra Pradesh as its own area; as the inter-state boundary dispute continued to simmer. The incident is the latest among a series of happenings in the border region in the last few months.

Access to three-four villages in Kotia GP got cut off due to heavy rain on September 27, under the impact of cyclone Gulab. Andhra Pradesh government sponsored anti-social elements took advantage of the situation and crossed over to Kotia villages, putting up two signboards in Telugu, to establish their ownership over the villages and to draw a new state boundary.

The dispute over the ownership of 21 of the 28 villages under Kotia panchayat had first reached the Supreme Court in 1968. In 2006, the apex court held that inter-state boundaries did not fall within its jurisdiction and only the Parliament could resolve them, as it imposed a permanent injunction on the disputed area. In August month, Odisha government deployed police and erected barricades at Kotia after the Andhra Pradesh administration attempted to launch several schemes in the area claiming its own. The state, formed on 1st November 1956, two decades after formation of Odisha, had recently announced the results of the panchayat polls it held forcefully in Kotia.

While, the bordering villages of Odisha, in Koraput, Gajapati, Rayagada and Ganjam districts, are endangered due to hooliganism of Andhra Pradesh minister and Officers, Odia language is facing step-motherly treatment there too. All are aware that Odisha and AP share common cultures and multiple interests relating to the promotion of native languages of the respective states in the border villages. Following the demarcation of the border between Odisha and AP, some of the schools in the border areas of Odisha and Andhra have merged with the school systems in Andhra and Odisha respectively. As a result, many Odia and Telugu speaking children in schools in the two states have become minority groups. Their native language needs to be supported.

Both the state governments had entered into an agreement to cater to the needs of the students who wish to learn their respective languages i.e.Telugu in Odisha and Odia in Andhra in schools. But requisite support is not being extended to the students of Vishakhapatnam and Srikakulam districts who wish to learn Odia, while Odisha has all along extended support to the students opting to learn Telugu as a language subject in schools including recruiting teachers for the same. Andhra Pradesh must reciprocate and extend a similar support to Odia minority students in AP. Now that the schools have reopened, Andhra government has to supply textbooks to the Odia medium students in Class X. It violates the bilateral agreement and adversely affects the education of the Odia-minority students in Andhra Pradesh.

Odia in Jharkhand was accorded second language status since September 01, 2011. But, the School and Mass Education department of Jharkhand has decided to abolish Odia language from the curriculum much to the chagrin of Odia people living in the State. This has created resentment among Odias living in Jharkhand. More than 20 Lakhs of Odia-speaking people live in 10 districts of Jharkhand such as East Singhbhum, West Singhbhum, Sareikela-Kharasuan, Ranchi, Gumla, Dhanbad, Bokaro, Simdega, Lahardega and Latehar. It is learnt that an advertisement published on September 20 by Jharkhand Academic Council has created doubt in the mind of Odia speaking people in the state. In this advertisement, which is meant for primary school teachers’ training, Odia language has been excluded from the list, while languages like Sanskrit, Bengali, Urdu, Ho, Mundari, Sanathali and Kudmali have been included. Odisha government is at present funding about 160 teachers through Utkal Samilani to impart education in Odia in the Odia speaking tracts of Jharkhand. Around 35 Odia schools are running in the state with the patronages of government of Odisha.

Saraikela and Kharsawan districts in Jharkhand were the Odia speaking princely states and among two of the 26 Garhjats that made the State of Orissa. However, during the State reorganisation exercise in 1948, the two princely states were clubbed with undivided Bihar, which has now become Jharkhand. Utkalmani Pandit Gopabandhu Das conducted a massive outreach in the Saraikela – Kharsawan and Singhbhum areas and as a result, more than 300 Odia schools were set up during 1913-1948.During the formation of Jharkhand, it was ensured that the newly formed state shall recognise Odia speaking people as linguistic minorities and shall preserve their rights. The government of Jharkhand recognised Odia along with six other regional languages as the state’s second official language.

The values preserved in the New Education Policy 2020 should be implemented in order to preserve the best interest of Odia speaking students in Andhra Pradesh and Jharkhand. It is high time that Odisha Chief Minister must personally discuss the bilateral issues with his counterparts of Andhra Pradesh and Jharkhand to resolve the issues amicably. The people of Odisha, can no more tolerate the attack on their motherland and mother tongue. It may affect regional tension and lawlessness and ‘unity amid diversities’ may turn to be a mere slogan only.