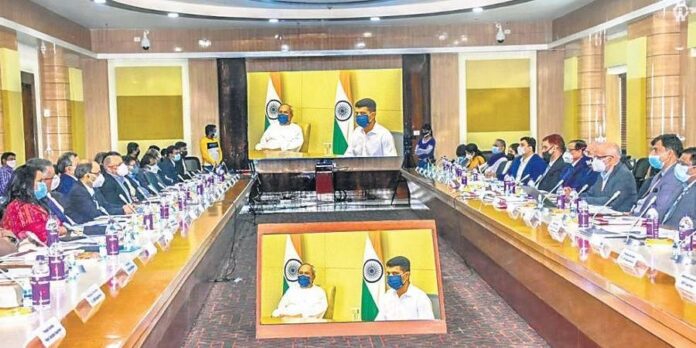 Odisha has got the inherent potential to surpass not only the other developed states of India, but also the Rhineland of Germany, as envisioned by the Late Biju Patnaik

The Deputy Chairman of NITI Aayog Shri Rajiv Kumar and his team of officials visited Odisha on 15th December 2021 and held detailed discussions with our Chief Minister on state’s economy. During the meeting our Chief Minister apprised the team that Odisha has been successful in combating Left Wing Extremism (LWE) and mobilization and economic empowerment of nearly 70 lakh women through Self Help Groups. He further stated that though Odisha has made substantial improvement in the last two decades both in macroeconomic and socio-economic indicators, the state is burdened with huge infrastructural gaps and vulnerability to recurring natural calamities. This requires a special dispensation from the Government of India to help the state catch up with the Frontline States. The Deputy Chairman advised Odisha Government to enhance its mining production and increase FDI in mining sector, develop the 10 aspirational districts of Odisha and switch to chemical free agriculture.

Odisha’s strength is its natural resources like Iron Ore, coal, bauxite, titanium minerals, chrome, manganese etc along with its water resources, forest coverage, marine resources and long coastline. Today the state is a leading producer of steel, stainless steel, aluminium and surplus state in power generation. Odisha’s economy is shifting from agrarian to a mixed economy led by industry- mining and port infrastructure. This has led to a reduction of poverty rate in the state. Despite all these positive developments, the state is still known as a poor and backward state. There is no remarkable improvement in the performance rankings in various parameters of Odisha vis-a- vis other States as every state is putting their best efforts to improve their performance further. As per NITI Aayog’s National Multidimensional Poverty Index (MPI 2021) report, 29.35% of the state’s population is multi-dimensionally poor. The MPI reveals that 59.32% people in Nabarangpur, 58.71% in Malkangiri, 51.14% in Koraput, 48.14% in Rayagada, 47.28% in Kalahandi, 44.9% in Mayurbhanj, 44.75% in Kandhamal and 41.78% people in mineral-rich Keonjhar, 38.8% in Gajapati,38% in Nuapada,  37.1%  in Deogarh,  33.03% in Boudh, 30.08% in Dhenkanal,  28.43% in Bhadrak,  28.42% in Balasore, 28.05% in Sonepur,  27.49% in Bolangir, 24.9% in Bargarh,  24.75% in Sundargarh, 24.53% in Sambalpur, 21.88% in Ganjam,  21.67% in kendrapara,20.75 % in Jajpur, 20.49% in Nayagarh, 18.62% in Jharsuguda, 15.49% in Khurda, 14.97% in Cuttack, 11.83% in Jagatsingpur, 11.64% in Puri  are struggling with poverty.  From this data it is evident that poverty is spread over most of the districts and acute in Southern Odisha.

Our Hon’ble CM is trying his best to improve the economy of the state so as to catch up with the Frontline States. The present GDP of Odisha is a mere Rs 5.40 lakh crores (2019-20) and our rank is 16th in the country where as the GDP of some of the front line States(in Lakh Crore Rupees) are Maharashtra 29.80,  Tamil Nadu 18.5, Gujarat 17.01, Karnataka 15.88, West Bengal 13.14, Andhra Pradesh 10.80, Telangana 9.69, Madhya Pradesh 9.62, Kerala 8.75. Hence to catch up with the first five states, Odisha has to race against time. As suggested by NITI Aayog, Odisha should improve all the parameters of SDI (Sustainable Development Index) in its 10 aspirational districts on top most priority. Hon’ble CM’s announced on 26.12.2021 (BJD foundation day) that the government is working to reduce poverty in Odisha from 30% to 10% in next 5 years, is a welcome move. State government is already working on various schemes for improving production in agriculture, horticulture, cash crops, cereals, oilseeds, fish, poultry and meat etc which will increase the SDI in all the backward regions. For better irrigation facilities, Govt should consider linking of various rivers. The need of the hour is to create jobs by inviting large Industries with special incentives for the 10 aspirational districts i.e. Kandhamal, Balangir, Rayagada, Koraput, Kalahandi, Dhenkanal, Gajapati, Nawarangapur, Nuapada and Malkangiri. Setup IT and ESDM companies, Pharma and defence production companies in district like Koraput, Kandhamal where the climatic conditions are favourable. Besides setting up medical colleges in all the 10 aspirational districts, the State Govt may plan to set up 5 Government Engineering Colleges in five aspirational districts and five agricultural and horticultural colleges in the rest 5 districts. Such government investments in these districts will lead to more money circulation in those areas and help in the urbanization.

For inclusive growth in the entire state, government should identify new railway lines so as to increase the rail density from the present 16 km to 32 km per thousand square km area. Government should identify the location and number of Bank branches and mobile towers needed so as to increase the density.  Govt should also identify new national highway requirement, up gradation of the present Highways from two to four lanes, 4 to 6 lanes. Expedite the construction of coastal highway from Gopalpur to Digha instead of Tangi to Digha, Raipur- Visakhapatnam highway through Koraput and Nabarangpur districts. Construction of 8 lane economic corridor from Paradeep to Barbil, construction of a direct new highway from Rayagada to Phulbani, Angul-Bangiriposi, Keonjhar to Balasore etc. Government should aggressively construct 5 to 6 new ports in addition to the existing 3 ports in next 5 years. To increase the blue economy, government should set up at least another 6 to 7 fishing harbours along its sea coast almost in all the coastal districts. State government has been taking proactive steps for overall development in areas like rural housing, health and sanitation, primary and secondary education, rural roads, bridges and highways, environmental protection etc along with several social schemes.  To augment the state’s revenue, government has been approving several large industrial projects in the mining, steel, aluminium and petroleum sector. Government has to see that all such large projects and downstream industries start their production at the earliest. In areas like software development and ESDM projects there is no appreciable progress. Government should aggressively promote these areas along with manufacture of semiconductor, automobile, defence, aerospace and railway equipments, pharma industries etc. Government should initiate to manufacture within the state some of the equipment used in mining, steel and petrochemical Industries such as pumps, compressors, furnaces, cokeoven, batteries, blowers, bearings, turbines, conveyor belts, rolling mills, electric motors, generators industrial paints etc.

After achieving the target of steel and aluminium plants, state government has to adopt now the Tamil Nadu model of industrialisation which has setup several Industries using less water, less power, more employment and on less land. They do not have mines and minerals like we have. Tamil Nadu has a mixed economy in agriculture, industry and innovation.  In the field of industries they have manufacturing units like boilers, wind energy turbines, filament yarn, apparel, garments, textile machinery, pumps, compressors, aerospace and defence equipment, biotechnology Parks, IT/ITES, railway coaches, tractors, earthmoving machinery, passenger cars, buses and trucks, motorbike, cycles, heavy vehicles, ships, railway engines, bus body building, textile machineries, electronics, pharmaceuticals etc. Tamil Nadu state has 530 engineering colleges (highest in India) and more than 60 medical colleges with more than 9100 MBBS seats. Aeronautical Development Agency is planning to build light combat aircraft, Tejas in Coimbatore. The GDP of Tamil Nadu in 2020-21 has risen to Rs. 21 lakh Crores and is the second wealthiest state in India. It is the most industrialized state in India and over 60% of the state is urbanized.

Odisha also should study the source of economic growth of cities like Pune, Visakhapatnam, Hyderabad and Bangalore especially the contribution of central PSUs, Defence Organizations and Central Govt. Establishments, educational and training institutes, research and development Centres, IT and ITES centres, Pharma industries and other Technology based units located in those cities. Odisha should now focus on setting up Institutions of national repute such as NIMHANS, NIPER, IIIT, NID, IIFT, Indian Maritime University and the proposed Steel University, Vedanta University etc. These institutions will change the image of Odisha from a poor state to a knowledge based state and increase the GDP of our state. Tata and Vedanta are planning to invest in semiconductor manufacture. Since both have deep rooted industrial activities in Odisha, utilising our natural resources, Tata should be requested to setup one in Tata SEZ Gopalpur and Vedanta at a suitable place in and around Bhubaneswar. Odisha should focus on Rare Earth based industries which has a great potential for the future world.

Improved work culture, sincerity, dedication and hardwork by the people of Odisha coupled with a strong political will, will change the destiny of Odisha. Biju Babu has exhibited his strong political will for constructing a port at Paradeep which today is heading to be the No. 1 port of the country. Naveen Babu should prepare a vision document for Odisha and implement it so as to achieve one trillion US dollar economy of Odisha by 2030 and eliminate poverty from the state.