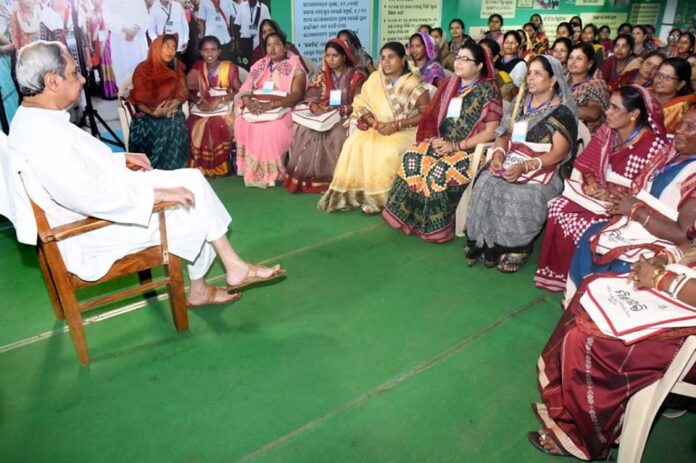 Women Empowerment Or Vote-bank Politics? That is the question being asked by opposition leaders in the wake of Naveen government’s decision to create a separate department of Mission Shakti for the empowerment of women. However, the government’s efforts are being appreciated by the general public and women in particular. And as long as they are happy opposition’s charges won’t matter much.  Similarly, the government is also trying to address the issue of farmers sincerely. With such moves it remains confident about winning the upcoming by-poll in Pipili.

Amidst the usual criticism from the opposition parties the Naveen Patnaik-led government has made some very important moves. One of these is the decision to create a separate department of Mission Shakti, a women empowerment initiative that organizes members of the fair sex into economically productive livelihood-supporting self-help groups (SHGs). Opposition has alleged that it is being done with an eye to the upcoming municipal and panchayat elections.

“With both urban and rural polls going be held in the state in less than a year’s time the chief minister is trying to consolidate his woman vote-bank,” said an opposition leader. Launched in 2001 during Patnaik’s first term as the chief minister the Mission was accorded the status of a directorate in 2018 under the department of women and child department that was renamed as the department of Women&Child Development and Mission Shakti. Ruling BJD leaders argue that making Mission Shakti into a separate department will not only help strengthen diverse SHG initiatives of the government by bringing them under one umbrella but also ensure more effective communication between the community of women and the government which will be mutually beneficial.

Since the objective of the Mission is not only formation of SHGs for women but also providing them financial assistance, establishing bank linkages and imparting training to women for capacity building and management of these groups, a senior BJD leaders felt that an independent department would ensure better service delivery, effective monitoring and  optimum utilization of human resources to impart a fillip to the SHG movement which has transformed the lives of lakhs of women in the state. “ This is a very important decision that will touch of the lives of lakhs of women. They will not only become economically self-reliant but also more conscious about their rights and role in the society,” said the leader.       Chief minister, Naveen Patnaik had himself described his cabinet’s approval of the decision to turn Mission Shakti into a full-fledged department as a “momentous occasion”. HE took to Twitter and wrote: “A momentous occasion in the transformative journey of @mission_shakti, which started as a scheme now becomes a department to carry forward the revolution with greater focus. #MissionShakti is now synonymous with women’s empowerment, transforming lives of millions.”

Opposition leaders, however, have other views. One of them said that the programme has been hijacked by bureaucrats and women only know about getting money from Naveen Patnaik government. There is no real effort to empower them or make them politically conscious. Opposition leaders cite statistics show that state recorded a sharp rise in rape cases in 2019 as compared to 2018. While 2502 cases of rape had been registered in the state in 2018 the number went up to 2950 next year, an increase of 17.9 per cent.

Some BJP leaders think that chief minister, Naveen Patnaik got the idea of strengthening his woman vote-bank from recent assembly elections in Bihar where women voted overwhelmingly in favour of BJP. “Following the announcement of Bihar results Prime Minister, Narendra Modi had acknowledged the role played by women in the victory of BJP-JD (U) combine in the state. That seems to have inspired Naveen Babu,” said a BJP leader.

The BJP, they says, had done quite well in Odisha in  the last panchayat polls held in 2017, emerging as the second largest party in the state’s rural belt, pushing Congress to the third position. Of the 846 Zilla Parishad seats for which polls were held BJD has won 473 followed by BJP’s 297. The Congress came a poor third with just 60 seats. “This shows that BJP is on the upswing in the state. So the chief minister is trying hard to counter our growing influence and an attempt to consolidate his woman vote-bank is part of this strategy,” said the leader.

However, ruling BJD leaders countered this argument asserting that chief minister had always paid special attention to women and he was the first leader to not only enhance women’s quota in the panchayati raj institutions to 50 percent but also campaign for 33 percent reservation for them in the Lok Sabha and state legislatures. “Naveen Babu has set a benchmark,” said a party leader pointing out that her party had given tickets to seven women in the last Lok Sabha elections with five of them including septuagenarian SHG leader, Pramila Bisoi emerging victorious.

Political analysts agree that Patnaik’s move of turning Mission Shakti into an independent department will attract more women to the ruling BJD but they feel it is natural. They say that Patnaik’s bid to empower women is excellent and must continue.

On the other hand while the opposition is raising a ruckus over the paddy procurement issue and the plight of farmers and a BJP MLA even made a suicide bid to highlight this the government is doing its best to bring relief to the farmers. While the entire procurement system has been streamlined the government is also fighting for farmers’ right to get remunerative price for their produce. It has been demanding MSP for them in tune with the recommendations of Swaminathan committee. The government has also been backing farmers on several other fronts and trying to provide them financial assistance where required. “Our chief minister has always done his best for the farmers. He has come up with schemes which have been appreciated at the national level,” said a BJD leader.

At the same the party is gearing up for the Pipili by-polll. The announcement of dates for the Pipili assembly bye-election has galvanized major parties to move into top gear with finalization of candidates and their respective campaign strategies. But given chief minister, Naveen Patnaik’s soaring popularity graph and the general mood of the people of the constituency, which was nurtured dedicatedly for several decades by Biju Janata Dal (BJD) veteran Pradeep Maharathy, it should be a cake-walk for the ruling party.

The chief minister had recently announced projects worth Rs.68 crore for the development of Pipili-Delang area in a widely appreciate move. The package re-assured the people of the constituency that the government cared for them irrespective of who represented them in the state assembly. As it is chief minister, Naveen Patnaik remains the most popular leader in Pipili because of the developmental drive his government has unleashed across the state. The area has been a BJD’s fortress and was well served by Maharathy, a seven-time MLA whose untimely death has occasioned the by-poll. Though there is a lot of speculation about ruling party’s likely candidate from the constituency anyone the BJD chooses to field is certain to romp home on the strength of Patnaik’s popularity.