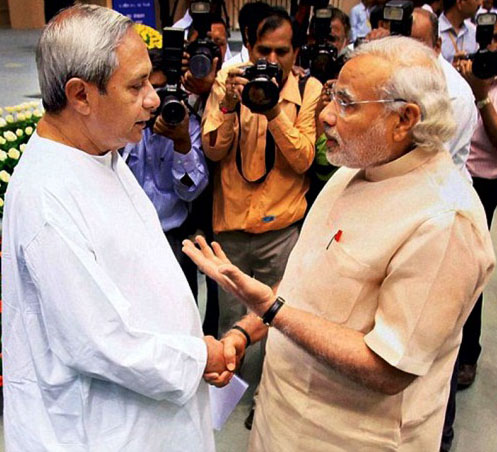 Both BJP and BJD have been behaving aggressively of late. It is more than obvious that they are gearing up for 2019. Their stepped up aggression is also an indication that it is going to be a no-holds-barred battle. While BJP is being fully backed by Prime Minister, Narendra Modi and party president, Amit Shah, BJD relies solely on the charisma of chief minister, Naveen Patnaik

Stage has been set for a decisive battle between BJP and the ruling BJD in Odisha following visits of Prime Minister, Narendra Modi and BJP president, Amit Shah to the state. Both the leaders launched blistering attacks on chief minister, Naveen Patnaik and his party. Both the sides are expected to scale up their pre-poll rhetoric in the coming days.

If BJP leaders are to be believed Shah would be paying more visits to the state in the coming days. “Shah, who had been firing one salvo after another against Naveen, is expected to step up his attack following the Modi blitzkrieg,” said a BJP leader adding that the hopes of a truce between the two sides created in the wake of BJD’s politically convenient walk-out during the July 20 no trust vote against Modi government and its backing for NDA candidate in the August 9 election to the office of Rajya Sabha deputy chairperson have evaporated.

“We are now at war with the BJD. There is no way we can go soft on them. The Prime Minister’s attack on BJD is a signal that we should now go all out against Naveen Patnaik. No one should have any doubts on that score. Amit Shahji will take this battle forward,” said BJP MLA, Pradeep Purohit.That Odisha figures prominently in the BJP’s scheme of things is evident from Modi and Shah’s repeated visits to the states. While Modi has visited the state at least six times since assuming office, his last being to address a rally on May 26 at Cuttack to mark the fourth anniversary of his government, Shah’s trips have been more frequent.

While Shah’s focus has been on fine-tuning his party’s strategy for the 2019 polls, with each visit he has also been scaling up his attacks on chief minister, Naveen Patnaik and coming up with fresh issues to target the state government. During his last visit to the state on July 1 he had sought to strike an emotional chord with the voters in Odisha by raising the issue of the missing key of Puri Jagannath temple’s Ratna Bhandar.  He had also targeted the chief minister for allegedly failing to utilize central funds.

In the past few months the BJP seems to have deliberately raised the pitch of its campaign against the BJD by harping on contentious issues like Centre’s support for the Rs.1 per kg rice being supplied by the state government and its refusal to join the Ayushman Bharat scheme. These two issues were also commented upon by  Prime Minister, Narendra Modi, who was obviously briefed by state BJP leaders, during his visit to the state yesterday. However, Modi seems to have handed his partymen in the state a new weapon against the BJD by targeting Naveen on corruption and specifically raising the “PC” issue.

“We have taken note of the issues raised by the Prime Minister and will build up movements against the state government on each of these. We treat BJD as our main enemy in the state and we will go all out against them,” said state BJP president, Basant Panda.

However, senior BJD leader and Rajya Sabha member, Prasanna Acharya exuded confidence about his party staving off any challenge from the BJP. “We have proved ourselves to be better than them in the past and will prove it again in future. If the Prime Minister and the BJP president think they can fool the people of the state by making baseless allegations they are wrong. As the chief minister rightly pointed out Mr. Modi was trying to enthuse his demoralized cadres by indulging in this kind of rhetoric,” said Acharya.

On the other hand chief minister Naveen Patnaik has been working consistently to popularize his party. Recently he flagged of a caravan that will spread awareness about the benefits of the newly-launched Biju Swasthya Kalyan Yojana.

The state government had launched the scheme on August 15 out of its own funds and shunned Centre’s Ayushman Bharat Yojana launched by Prime Minister Narendra Modi in Jharkhand on September 23.

Modi during his visit to Odisha on September 22 had appealed to the Odisha government to be part of the programme. However, Naveen ignored the Centre’s plea and went ahead with the state’s own programme.

Health Minister Pratap Jena said under the Biju Swasthya Kalyan Yojana stress had been laid on the universal health care and special attention had been given to health care for the weaker sections of the society. Under the scheme free heath care will be given to people irrespective of caste, creed, race, income and residence at health sub centers up to the level of district headquarter hospitals.

Besides, assured heath care benefits up to Rs 7 lakh will be provided to women and Rs 5 lakh to men belonging to 70 lakh economically weaker section families. All the families eligible under Rashtriya Swasthya Bima Yojana, Biju Krushak Kalyan Yojana and Odisha State Treatment Fund have been included under Biju Swasthya Kalyan Yojana, said he.

Chief minister Naveen Patnaik recently also met top-notch industrialists of southern India at Chennai and invited them to explore business opportunities in Odisha. Naveen also urged them to be a part of the second edition of Make in Odsiha Conclave to be held here in November.

This was the third meeting of Naveen with industrialists after his meeting with the tycoons of business world in Mumbai on August 8 and eminent business personalities in Delhi on September 12.  Naveen had also met ambassadors different countries in New Delhi and told them how Japan is going to be the country partner for Make in Odisha Conclave. With such initiatives Naveen can be confident about countering the threat from BJP.