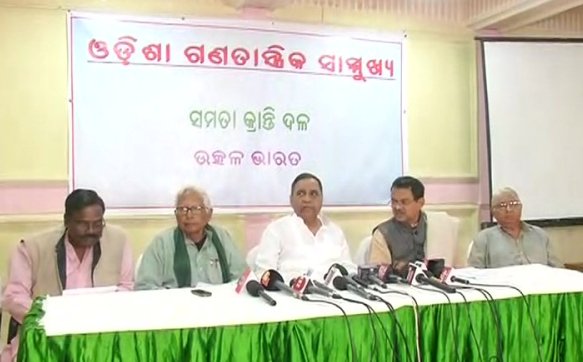 Politics makes strange bed-fellows and given the compulsions that the elections impose on parties anything can happen. So, one should not be surprised if AAP and the new Sammukhya actually join hands.

They are, of course, hoping that it would get support from like-minded parties and make an impact in the upcoming polls. However, while former minister, Damodar Rout has steered clear of the new formation former Kendrapara MP, Baijayant Panda, too, has been non-committal.

Panda, who is yet to announce his future plans, is being expectedly cautious. He would rather wait patiently that act in a hurry and repent at leisure. Tripathy and Swain then would obviously be banking on smaller parties and perhaps the two communist parties apart from leaders like expelled Congress leader and former union minister, Srikant Jena and his protégé, former Koraput MLA, Krushna Chandra Sagaria to take their initiative forward.

There are strong rumours about Jena joining the Aam Admi Party (AAP) which, over the last few years has attracted leaders from various political parties. AAP leader and Delhi chief minister, Aravind Kejriwal recently addressed a rally in the state capital where Jena was also present. Speculation is rife that Ganatantrik Sammukhya may join forces with AAP in Odisha.

But any such move is fraught with dangers as AAP’s style of conducting politics is entirely different from traditional parties and politicians. The party and its leadership have often been accused of propagating anarchism and treating people to dreams. Both Swain and Tripathy are politicians in the traditional mould and would find the AAP ideology rather uncomfortable. Same could be said of Jena who has been the face of OBC politics in the state.

But politics makes strange bed-fellows and given the compulsions that the elections impose on parties anything can happen. So, one should not be surprised if AAP and the new Sammukhya actually join hands. They can then occupy the political space that is gradually being vacated by a rudderless Congress which appears to be in a tailspin following a spate of resignations. Despite the brave front being put up by Pradesh Congress Committee (PCC) president, Niranjan Patnaik it is now more than clear that the party after showing promise for brief while has lost the plot.

Traditional logic would suggest that BJP should gain from the decline of the Congress in the state as happened in the 2017 panchayat elections when the saffron party won a record 297 zila parishad seats against the 36 it had bagged in 2012. Its gains had followed the slide of the Congress which is still struggling to put its act together.

But that is traditional logic. Conversely it can also be argued that the Congress voters who opted for BJP in the panchayat elections because they had no other choice may vote for the Sammukhya-AAP combine this time if such a coalition actually comes into being.