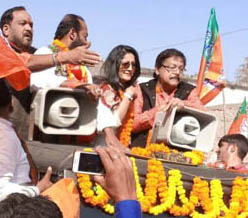 Union petroleum and natural gas minister, Dharmendra Pradhan is widely perceived to be the chief ministerial candidate of the BJP in the next elections. However, it seems well known Odia acress, Anu Choudhary, who joined the BJP recently alongwith her industry colleague, Mihir Das, already sees him as the chief minister of the state. She raised quite a few eyebrows by addressing him as the chief minister of Odisha at the Saksham cyclothon organized by Petroleum Conservation and Research Association (PCRA), a society under the ministry of petroleum and natural gas, at the Kalinga Stadium on Sunday. If it was a slip of tongue it must have pleased Pradhan immensely.