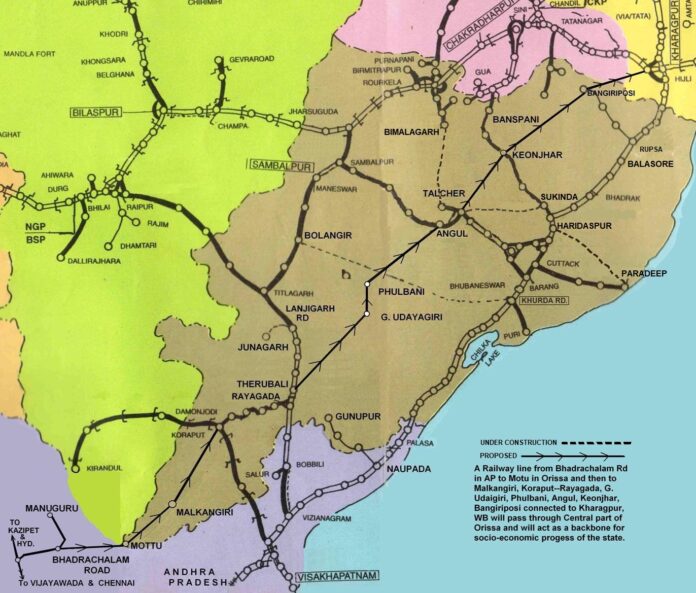 A New line from Bhadrachalam (AP) to Kharagpur (WB) passing through central parts of Odisha from Mottu to Malkangiri- Rayagada Phulbani-Angul-Baripada will be a game changer for Odisha’s Development.

Odisha’s economy is shifting from agrarian to a mixed economy led by industry-mining and port infrastructure.  Integration of various ports and port based industries along the eastern coast of the state with mining and mineral based industries in the central as well as western parts of the state, calls for a comprehensive action plan for enhancing railway network in the state.

The present rail density in the state is about 16 KM per one thousand sq km of land. The average density of the country is 22 KM and several states like Punjab, Tamil Nadu, UP, WB, Haryana, Bihar have densities between 30 to 40 KM. Hence it is pertinent that by year 2036, Odisha should plan for a density of about 32 KM which will be about 5000 KM of rail route length (as against the existing about 2570 KM) considering Odisha’s area of 155707 sq km. Railways play an important role in the speedy development of a state. It is the life line for any socio- economic development as railway lines generate large scale employment, easy and faster public transport and pollution free goods transport is a major infrastructure for any industrial and economic development. Hence the state Govt should lay special emphasis for the railway development of the state or else the ambitious economic growth- planned by the state Govt will be a dream.

The four ongoing new constructions totaling 615 KM between Anugul- Sukinda (90 km), Haridaspur-Paradeep (82 KM), Khurda Road- Balangir (289 KM) and Talcher-Bimalagarh (154 KM), once completed will increase our total route length to 3185 KM. The first two of the above lines are nearing completion and the other two are moving at snails speed. Additional 165 KM sanctioned i.e. Jeypore-Malkangiri (127 KM) and Jeypore-Nawarangpur (38 KM), after construction will increase the statesroute length to 3350 KM. In order to achieve a total route length of 5000 KM by the year 2036, Odisha has to plan another 1650 KM across the state right now and take proactive steps for its survey, getting various approvals by appropriate authorities, land acquisition, budget provision etc.  The railway map of Odisha, reveals that one line passes through the coastal track from Balasore to Berhampur and another line from Rourkela-Titlagarh to Rayagada in the Western Periphery. All other lines which are existing as well as are under construction are from Eastern to Western directions viz. Rupsa-Bangiriposi, Jakhpura-Keonjhar-Banspani, Cuttack-Sambalpur, Talcher-Bimalgarh, Khurda-Balangir, Naupada (AP)-Gunupur.

There is no Rail line passing through South to North direction covering the Central parts of Odisha. Hence to take full advantage of the existing and upcoming lines, Odisha should form a Railway grid by constructing a line from Southern to Northern end passing through central parts of the state which intersect all the lines from the East to West direction and will make a grid. For this, the Govt. should plan for a Railway line from Bhadrachalam in AP to Kharagpur in WB passing through Mottu, Malkangiri, Jeypore-Rayagada (existing), Phulbani-Anugul-Keonjhar-Baripada in Odisha territory. This line will provide seamless movement of passengers as well as cargo movement like Iron Ore, Coal, Bauxite, Alumina, Steel, Aluminium, fertilizer, petroleum and other agricultural products within and outside Odisha as both Bhadrachalam and Kharagpur are well connected with other parts of the country. This proposed line once completed will bring a positive change to the entire economy of the state. Industries like NALCO, Utkal Alumina, Vedanta, Aditya Aluminium, TATA Steel, JSPL, MCL, FCI, NTPC and several mining and metal units will be greatly benefitted. This entire backward tribal region of the central parts of Odisha will be the major beneficiary. This will help reduce the logistic cost and time.

Every year Railway Budget provides funds for growth of Odisha’s Railway network. It is noticed that a large percentage of the funds are for doubling and 3rd line construction as well as for Railway Electrification. The immediate need of Odisha is construction of new lines covering almost all districts rather than doubling and electrification. Hence Odisha should propose for utilization of a major portion of funds allotted in the budget, say 50%. Looking into various social and economic considerations, State Govt should plan the following 1650 km new rail routes which once completed will enhance our length to 5000 KM and density to 32 KM.

(i) Gunupur-Therubali (80 KM) (ii) Nowrangpur-Junagarh-Titlagarh (180 KM) (iii) Berhampur-Bhanjanagar-Phulbani-Redhakhol (Sambalpur) (240 KM), (iv) Bhadrachalam-Mottu-Malkangiri-Jeypore-Rayagada-Phulbani-Anugul-Keonjhar-Baripada-Kharagpur (in Phases) (total about 600 KM) (v) Sambalpur-Keonjhar-Balasore-Subarnarekha Port (300 KM), (vi) Badampahar-Bangiriposi (50 KM). (vii) Bangiriposi-Gorumahisani (50 KM) (viii) Budhamara-Chakulia (50KM) (ix) Naupada-Balangir (105 Km). The above proposed 1650 KM new lines, if undertaken will fulfil most of the aspirations of the people of Odisha as well as will look into the interest of the mines and industries and will ultimately benefit Indian Railways. For smooth execution of various projects, the proposed new Railway Division at Rayagada may be commissioned expeditiously along with the Railway workshop project at Narla Rd.

Since Railway projects take a long time for completion, it is pertinent that Govt initiates action soon in its right earnest. Achieving 5000 Km of rail route length in Odisha by the year 2036 will be a centenary gift for the people of the state and to the late leaders who fought for a separate Odia speaking state, a befitting tribute.