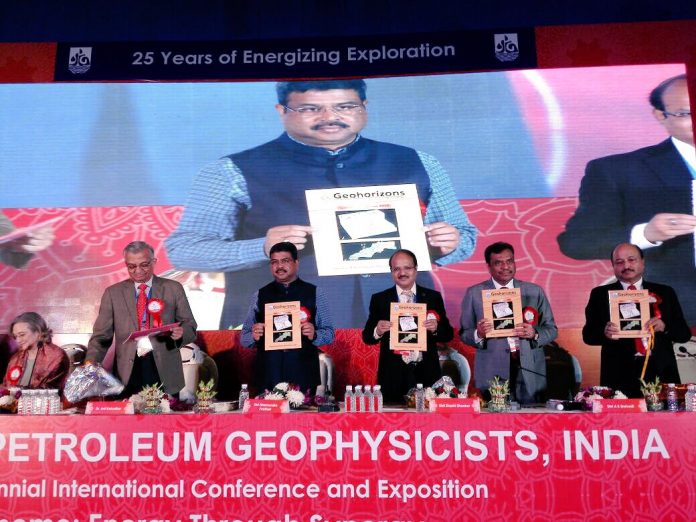 18 November 2017, Jaipur: The 12th Biennial International Conference & Exposition of Society of Petroleum Geophysicists (SPG) India was inaugurated by Union Minister of Petroleum & Natural Gas and Skill Development & Entrepreneurship at Jaipur today. The three days International Conference & Exposition of SPG India will remain open till 19th November 2017.
During his second consecutive visit to SPG conference, Dharmendra Pradhan stressed upon theme of conference “Energy trough Synergy” in his inaugural address and emphasized upon the importance of Oil sector in India’s energy ecosystem and its role in national economy. Elaborating on the changing energy scenario, he mentioned the historic stages of development of the energy supply and its impact on industry. Elaborating further, he expressed that the first industrial revolution was a result of development of Coal-seam derived energy. In due course of time, the energy sourcing changed over to hydrocarbon followed by electricity. With India being the third largest consumer of the energy in the world, the Hon’ble minister emphasized upon bringing new and alternate energy sources like Gas hydrates in the energy supply chain. Speaking about SPG, he mentioned that such conferences are platform to provide an environment for various players of the energy arena to come together and exchange ideas for scientific and technological innovation.
In his opinion, Data is a key factor for growth because Old data viewed from a new perspective over a period of time, can result in new opportunities. Referring to Geo-science technologies as the key link in improving exploration success for oil and gas in the country, He categorically expressed his expectations from the Geo-scientific community to reduce import dependency by at least 10% and ensure energy affordability, sustainability and accessibility for entire spectrum of people of India in order to fulfill the vision of the Prime Minister of India. Talking about policy decisions taken by Govt. of India, he made reference to various initiatives taken by the Governments to facilitate the ease of carrying out business in energy sector of India while ensuring that the revenue income will also grow.
He also released the Souvenir and special issue of half yearly journal, GEOHORIZON.
Speaking on the occasion, Guest of honour Dr. Anil Kakodkar (Padma Vibhushan), emphasized upon the ‘Exploitation of Knowledge’ for national growth. Talking about the importance of knowledge, he emphasized upon need to develop a peer system to retain decision specific knowledge. He also opined that hierarchical system is not conducive for proper utilization of knowledge in decision making. Towards this he exhorted the energy sector for nurturing a body of peers to develop the youngsters. In the inaugural session, the Union Minister Dharmendra Pradhan presented the coveted B S Negi Convention Gold medal and life time achievement award to Mr. P S N Kutty, Ex-Executive Director, ONGC for his lifetime achievement in the field of geosciences.
The session was also addressed by Shashi Shanker, CMD, ONGC & Chief Patron SPG, A K Dwivedi, Director (Expl) ONGC & Patron SPG, Ms Nancy House, President, SEG USA, Marcel Van Loom, Director, EAGE, Netherland & D Purkayastha, President SPG, India.