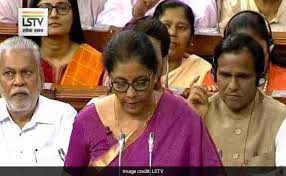 Road and infra cess raised by Re 1 per litre, will boost development of infrastructure Budget envisions India as a global hub for manufacturing electric vehicles Lowering of GST on electric vehicles from 12% to 5% sought Additional Income Tax Deduction of Rs 1.5 lakh on interest paid on loans taken to purchase Electric Vehicles

Transport sector has been allocated enhanced outlay of Rs 83,000 crore in the Union Budget presented today. Budgetary allocation for the Ministry last year was Rs 78,626 crore.The Finance Minister announced in her Budget speech that the Government will carry out a comprehensive restructuring of National Highway Programme to ensure that the National Highway Grid of desirable length and capacity is created using financeable model. She said, after completing the Phase-1 of Bharatmala, states will be helped to develop State road networks in the second phase.The Central Road and Infrastructure Cess on petrol and diesel has also been raised by Re 1 per litre. This will give a boost to the development of Infrastructure.

The Union Budget has also outlined various proposals for giving a boost to manufacturing of electric vehicles and developing India as a global hub for the same. Under Phase-II of the FAME Scheme, only advanced battery and registered e-vehicles will be incentivized, with greater emphasis on providing affordable and environment friendly public transportation options for the common man. The main objective of the Scheme is to encourage faster adoption of electric vehicles through upfront incentive on purchase of such vehicles and also by establishing the necessary charging infrastructure for the same. Phase II of FAME has an outlay of Rs10,000 crore for a period of 3 years, and has commenced from 1st April, 2019.

The inclusion of solar storage batteries and charging infrastructure in the FAME scheme will give a boost to manufacturing, which is needed for India to leapfrog and become a global hub for manufacturing of these vehicles.

To further incentivise e-mobility, customs duty is being exempted on certain parts of electric vehicles.