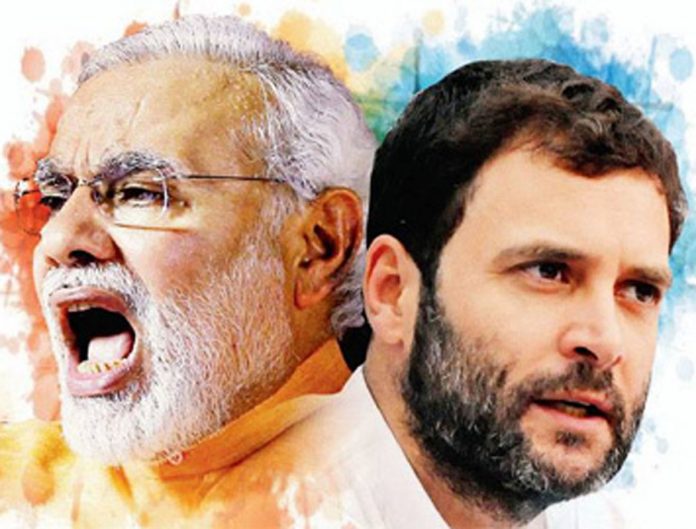 Congress has made Manipur their political battleground where they have been pitting one community against another for personal gain. This is only one part of the battle that is being fought between Prime Minister and the Congress president Rahul Gandhi. Another battle is being fought in Karnakata where both are putting everything into the campaign.

The Rahul Gandhi-Narendra Modi battle is getting interesting. Ahead of the Nagaland assembly polls Congress president attacked the Prime Minister over his 2015 claim on Naga peace accord. The young Congress chief took to Twitter and questioned the Prime Minister on the Naga accord which has great political significance. Rahul reportedly said, “August 2015, Mr Modi claims to create history by signing the NAGA accord. Feb 2018, Naga Accord is still nowhere to be found. Modi Ji is the first ever Indian PM whose words don’t mean anything..”

The Naga Peace Accord, a landmark development, was signed between National Socialist Council of Nagalim-Isak-Muivah (NSCN-IM) and the Centre in August 2015. The signing of the agreement came after several rounds of negotiations that spanned 18 years with the first breakthrough in 1997 when the ceasefire agreement was sealed. The Prime Minister had hailed the accord calling it the end of a vexed problem and the beginning of a new future in the northeast region.

Rahul Gandhi has been far from convinced. In February 2017, he termed the accord as a ‘pre-paid’ one and said that ‘nobody knows about the accord. While addressing a rally in Manipur, the Gandhi scion had claimed that even Manipur Chief Minister Okram Ibobi Singh was not taken into confidence before signing the agreement. Rahul’s comment came after Modi accused the Congress government in Manipur of spreading false propaganda on the accord and said there was nothing in it that was detrimental to the interests of the state.

Modi had alleged that the Congress party was dividing people by spreading lies about the Centre compromising the territorial integrity of Manipur by signing an accord with the National Socialist Council of Nagaland Isak-Muivah (NSCN-IM) insurgent group. “People have been talking about the accord with the Nagas. I want to ask the CM, were you sleeping for 1.5 years? You never wrote a letter to Centre seeking details. I alone revealed everything about the accord to the Congress. They are dividing the people of Manipur by spreading lies,” Prime Minister Modi said at a rally in Imphal. He also said the Congress has made Manipur their political battleground where they have been pitting one community against another for personal gain.This is only one part of the battle that is being fought between Prime Minister and the Congress president. Another battle is being fought in Karnakata where even BJP president, Amit Shah is putting everything into the campaign.

Rahul, among other places, visited Anubhava Mantapa, a 12th century seat of political and philosophic discussions in the northernmost tip of election-bound Karantaka. Electoral “self-interest” politics has not convinced the voters even as the BJP is seeking to strike a chord with the Lingayats. Both the parties are campaigning assiduously with Prime Minister and Rahul throwing everything into it.  There will be many more fronts on which the two will fight but these elections will be the real test of their popularity.