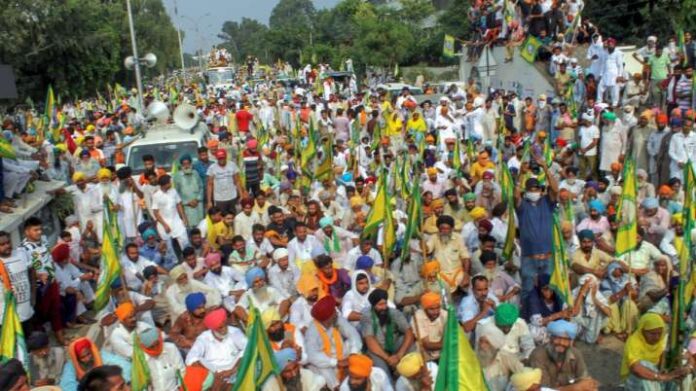 There is a tremendous international pressure and huge amount of foreign funds and lobby is involved to divide India into two more separate countries. There are no agitating real farmers of India, not even farmers of Delhi & NCR, taking part in this so called farmers agitation.

Thousands of farmers protesting near Delhi against the Centre’s three farm laws are planning to intensify their protest after the government refused to repeal the laws.

The government has held several formal rounds of talks with the farmers. Seven months have passed when the ordinance was brought and later made into law. The farmers are demanding the repeal of these laws and they believe that the only option left is to intensify protest.

Through one of the largest strikes in decades witnessed by India, the farmers are demanding the repeal of the three contentious laws. The laws essentially change the way India’s farmers do business by creating free markets, as opposed to a network of decades-old, government marketplaces, allowing traders to stockpile essential commodities for future sales and laying down a national framework for contract farming.

These laws are the Farmers’ Produce Trade and Commerce (Promotion and Facilitation) Act, 2020, the Farmers (Empowerment and Protection) Agreement on Price Assurance and Farm Services Act, 2020 and the Essential Commodities (Amendment) Act 2020.

Amid the rainfall reported in the national capital and neighbouring regions, the protesting farmers installed a mega tent at centre stage where their leaders address every day. The 60 feet x 280 feet dimension waterproof tent covers the sitting area in front of the main stage.

The rounds of discussions with farmers were the opportunity to explain the farmers on the benefits of the new farm laws against which they have been protesting. The Union Agriculture Minister wanted to discuss point to point discussion on all possible doubts, confusions and apprehensions raised in the mind of the farmers and more particularly of their leaders.

Punjab CM captain Amarinder Singh said that the solution to the protests must come from the Prime Minister’s level. He said that the PM should sit with his ministers and come up with a solution. Singh said that the Centre should bring peace to the state and get the farmers back home by repealing the laws. He said that new laws could be formulated later after speaking with farmers’ committees but the currently laws must be repealed since the farmers were demanding it. He said that no law had the sanctity which can’t be touched, citing the several constitutional amendments since its introduction.

The protesting farmers have constructed brick floor using cement, gravel and bricks at the Tikri border. The tents were flooded with water due to rains and they had to sit throughout the night, without sleep. They plan to construct more in coming days, as they want to continue their protest till the laws are repealed.

Farmers at Singhu border launched massive exercise to cover all the tents with waterproof plastic sheets. Large bamboo sticks and iron pipes were brought to the border with hundreds of waterproof tarpaulin sheets to cover the tents. Farmers said a mega tent is also being set up at the centre stage from where the leaders address the protesters every day.

The National Capital’s borders with Haryana and Uttar Pradesh continued to remain closed at several points due to the ongoing farmers’ agitation. Delhi’s borders with Uttar Pradesh at Chilla and Ghazipur have remained closed for those coming from Noida and Ghaziabad while the opposite carriageway remains open.

The citizenry of NCR do not require personally any media – be it print, electronic or social – to show them the truth of this so-called “farmer protest”. They strongly believe that there’s a tremendous international pressure and huge amount of foreign funds and lobby is involved to divide India into two more separate countries. There are no agitating real farmers of India, not even farmers of Delhi & NCR, taking part in this movement. Only political farmers who grow and harvest foreign funds for themselves have assembled on the outskirts of New Delhi, blocking the connecting roads to hinder the supply of essential goods and medical equipments crucial for them.

They also believe that political farmers have come from Punjabi Film industry, Khalistan Movement Sikhs, members of Congress party, AAP, TMC, CPI, CPM etc, Bollywood, Ravan army, Shaheen Bag mobsters, few reporters from Godi Media-sitting on the lap of these political forces – and members of Darul Uloom Deoband Sunni Muslims, JNU, AMU etc. They have all assembled to pass “Partition of India act 2020” or Referendum 2020, under international lobbying. They are trying to repeat Shaheen Bagh anti CAA Delhi riots, and instigate communal violence in India; which is nothing but an attack on the Sovereignty and Integrity of India. The design has been orchestrated by their masters and fund providers staying in countries including Canada, Britain, United States, Italy etc. These countries are indirectly interfering into the internal reforms of Indian Parliament, Indian Constitution and the Supreme Court of India.

The Government and Indian Citizens should completely boycott and ignore this, foreign funded, foreign lobbied, politically motivated, separatists movement, anti-India movement; labelled as “Farmer Movement” in an attempt to pass “Partition of India act 2020” aka referendum 2020. India must stand united against all foreign miscreants planning to repeat the horrors and mishaps of Partition of India act 1947.

India was the biggest consumer of the West for 70 years. ‘Atmanirbhar Bharat’ is the commercial blow. The Western countries used to dump low quality supply at much higher rates just by bribing the Indian politicians. As now under the new government, Indians have high nationalist morale to make India into a self dependent manufacturer and has become their possible competitor. Corona vaccines from India have been ordered by countries world over, whereas the demand for vaccines developed by Russia, China and USA have remained far behind. This example is enough to measure the inner potentials of India. They are now engaged to derail the speeding Indian government with the help of sensitive ‘Annadata’ issue.