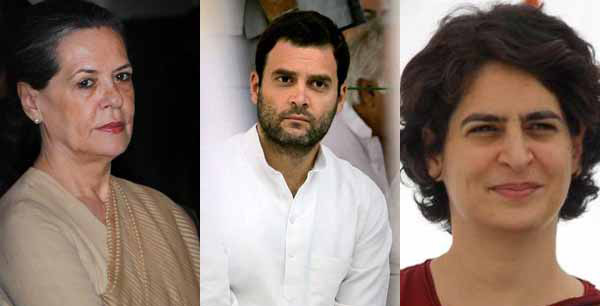 The question is – why the party finds it so difficult to arrive at a consensus on a leader from outside the Gandhi family. Strangely even the name of Rahul’s sister, Priyanka Gandhi Vadra was discussed but there could be no unanimity over anyone outside the ‘parivar.’

The appointment of Sonia Gandhi as the party’s interim president has evoked a feeling of déjà vu among Congress watchers. The development was preceded by long drawn out meetings held to choose a new party president following Rahul Gandhi’s resignation. But all that now looks like a drama.

First there were emotional appeals from a slew of senior leaders and even dharnas by party workers to make Rahul reconsider his decision. But Congress’ Prince Charming who failed to deliver at the hustings was unrelenting. His self righteous anger at not getting expected support from senior leaders during the elections made headlines. He was badly hurt and was hell bent on party choosing a new leader.

The Congress Working Committee (CWC) and the regional groups had their meetings with Sonia and Rahul staying away apparently to ensure an impartial decision. There was talk of a successor from outside the ‘family’ and names of leaders like Mukul Wasnik began doing the rounds. And then came the news that the committees have concluded their proceedings by recommending Sonia as the interim chief.

Her appointment that follows more than two months of uncertainty arising out of Rahul Gandhi’s resignation from the top post is significant not only because she takes over the reins of the Congress at a time when it is fresh from one of its worst defeats in the elections but also for the fact that it highlights the party’s failure to look beyond the family. Even though Rahul had made it known that the new leader should be from outside the family a consensus eluded the decision makers.

Though the party constitution authorises the CWC to appoint an interim chief until the election of a new president the question is why the party finds it so difficult to arrive at a consensus on a leader from outside the Gandhi family. Strangely even the name of Rahul’s sister, Priyanka Gandhi Vadra was discussed but there could be no unanimity over anyone outside the ‘parivar.’

The fact is that Gandhis are the glue that binds the Congress. Experience or no experience they are the most eligible people to lead the party because the family has made great sacrifices for the country. The family , too, has become so used to power and adulation of workers that it cannot reconcile with the idea of anyone else leading the party. In case that becomes inevitable the person entrusted with the job has to be a hardcore loyalist who will do their bidding.

That is why a Manmohan Singh as the Prime Minister was fine for them but they could not accept PV Narasimha Rao who was an astute politician but not someone who would crawl when asked to bend. The Gandhis will not allow their hold on the Congress to slacken under any circumstances.