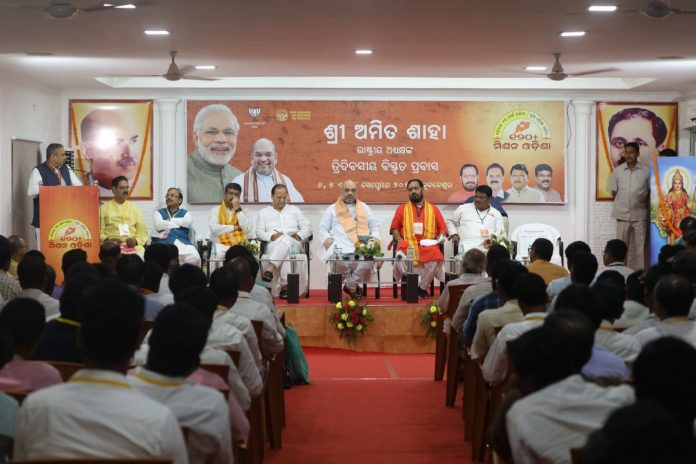 The recent visit of BJP president, Amit Shah to the state has set the tone for the party’s campaign for the next election. The ruling BJD cannot but respond to BJP’s aggressive posturing with equal ferocity. By all accounts it is going to be a riveting, yet messy political battle

On the upswing, having won crucial elections in some important states the BJP is now out to conquer the East. Its ambitions have been whetted by its victory in Assam. The land of Kalinga is the party’s next target. That the party would pull out all stops to achieve this aim was recently made clear by its top leader and president, Amit Shah himself.

On his  second visit to the state in as many months BJP’s master strategist said his party was confident of achieving the target of winning more than 120 assembly seats in the state on its own. He also made it known that BJP would go it alone in the polls.

“There will be no alliance. We will fight alone,” said Shah while mocking those casting doubts on his party’s ability to win 120 in a 147-strong House. “Such doubts exist only in the minds of people who are getting old. Our leadership is young and confident of achieving any target,” he announced with a smile.

He also cited the example of BJP spectacular victory in UP against all odds.  “It is going to happen in Odisha also. We are working hard,” he quipped.

Shah knows the art of galvanizing party cadres. Unlike in the past when many a time he refused to attack the Naveen Patnaik government despite provocation from state BJP leaders, he made lacerating attacks on it this time. Aware that his party leaders and cadres wanted him to be aggressive he accused  the state government of not only non-performance but also not cooperating with the Centre in the implementation of developmental projects sponsored by the Modi regime. He also took a dig at the “best administrator” award that Patnaik received from a national magazine recently in Delhi.

There was little doubt that the strongman from Gujarat was being deliberately provocative. And he this was not the first time he had done so. Earlier he had trained his guns at both Congress and the BJD for lacking internal democracy. He had accused both the parties of indulging in dynastic politics.

“Everyone knows who will be next president in Congress after Sonia Gandhi. There is no confusion about it. I am the national president of BJP now. But, no one can foretell who will be next president in BJP. That’s because BJP believes in internal democracy,” he had said adding that similar was the case with BJD which had many leaders with potential but they were not getting their due because they were “ not  born in Biju Babu’s house”. He also targeted Patnaik’s deficient Odia, something which many opposition leaders consider to be the chief minister’s Achilles heel.

Shah visit is certain to intensify the BJP-BJD turf war in the state where the Congress, though technically in the main opposition party, seems to be on the wane. BJP is upbeat because the Congress has virtually conceded it the space that belonged it rightfully as the main opposition party. Besides the saffron party, which has a mere 10 MLAs in the state assembly against 117 of the BJD, got a major boost when it won 297 zila parishad seats in the recently held panchayat elections against its tally of 36 ZP seats in 2012.

Ever since the war of words between the two sides has escalated with both recently taking potshots at each other over the issue of poll expenses of their leaders. While the BJP sought to bring chief minister’s poll expense accounts for 2014 elections under the scanner alleging that there was a mismatch of Rs.3.51 lakh in the accounts statements submitted by him and his party, the BJD brought similar charges against union minister, Jual Oram.

This was the first instance of BJP directly targeting the chief minister, who had managed to remain Teflon-coated, on the issue of corruption. Oram had sought to up the ante by offering to resign if the charges against him were proved and asked Naveen to do the same in case he was proved guilty.

BJD leaders, however, saw this as a desperate attempt by the BJP to besmirch Naveen’s lily-white image ahead of 2019 elections. “ They are making baseless allegations hoping that the charges would stick. But they are not going to succeed,” said a senior party leader.

However, what is clear is that with the faction-ridden Congress being reduced to the status of a marginal player in the state despite its 16 MLAs it is, for all practical purposes, BJP vs BJD in Odisha with battle lines getting sharply drawn ahead of what is being billed as the ultimate showdown in 2019.

BJP was the first to chalk out its strategy for the 2019 polls with focus clearly on Odisha, a message the party sent out loud and clear by holding its national executive meeting in Bhubaneswar in April.  It was followed up with Shah’s visit to the state from July 3 to July 5 as part of party’s “mo booth sabuthu mazboot (my booth is the strongest)” programme. The BJD has responded with programmes such as Ama Gaon Ama Vikas (our village our development) and organizing training camps for block level party leaders to make them ready for 2019 elections.

The rivalry between the two sides that had reached a flashpoint in February last year when BJD and BJP workers clashed at Paradip during the dedication of Paradip oil refinery to the nation by Prime Minister, Narendra Modi even cast a shadow on the 22nd Asian Athletics Championship held last July in Bhubaneswar. The BJP boycotted the inaugural ceremony of the showcase event hosted by Odisha for the first time.

Political analysts see a no-holds-barred battle in the offing. “ This war is only going to get murkier. With BJP buoyed by its success in the panchayat polls setting itself an ambitious target of winning 120 assembly seats in the state BJD cannot but respond to this with equal aggression,” said an old Odisha watcher.