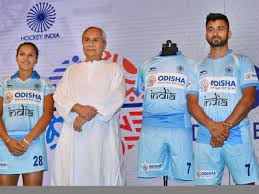 Sponsorship in sport is a multi-billion dollar business globally. Businesses see sponsorship from a commercial and marketing perspective. Sponsorship recipients see it as a means of funding. It could be valued in terms of money. Either way it is a business agreement between two parties. The sponsor provides money, goods, services or know-how. In exchange, the sponsored individual, event or organisation offers rights and associations that the sponsor utilizes commercially.

Hockey in Odisha is more than a sport; it’s a way of life, especially in our tribal regions, where children learn to walk with hockey sticks. No wonder, Odisha has produced some of India’s finest hockey players. Odisha have produced several hockey greats including former captains Dilip Tirkey and Sunita Lakra. The current Indian teams also have several players from Odisha including Birendra Lakra, Amit Rohidas, Deepsan Tirkey and Namita Toppo to name a few. Hence, Odisha and Hockey are inseparable, although except Sundergarh district, we failed to make the national game popular in school and clubs in any other part of our state.

Until recently, Sahara India was sponsoring Hockey India. It has withdrawn as main sponsor. As no corporate house has expressed its willingness to sponsor the Indian National Game, Odisha has come forward to fill the vacuum, which is believed to be a masterstroke of BJD government. Most Odias have welcomed it as something that would put Odisha firmly in the national hockey map. But in the general euphoria over Naveen Patnaik’s ‘masterstroke’, very few have stooped to think if the Odisha government’s decision, to sponsor the Indian hockey team for the next five years in a first of its kind deal worth Rs 150 crores, would really help the development of Odisha hockey in any way.

Odisha has 30 districts; but excepting Bhubaneswar, Rourkela and Sundargarh, no other Hockey ground has Astroturf at present. Hockey is played in these 3 centers with the help of the SAI sponsored Sports Hostels only. When the High Schools don’t have Physical Training Instructors, appointment of qualified coaches in Zilla Schools and major Government Schools and colleges is a day dream. Hockey sticks, balls, nets and leveled grounds are the facilities; our youngsters see in Television only.  Therefore, many believe that the five-year sponsorship deal is nothing but an exercise in gaining political mileage at the cost of the public exchequer. The glittering event in New Delhi, where the team jerseys with the Odisha logo were released by the Honourable Chief Minister with much fanfare, estimated to be worth at least Rs 5 crores. Few crores more the government have also spent on full page, colour advertisements on all major newspapers in the state together with sundry other expenses that the government is bound to incur over the next five years in promoting itself on the pretext of sponsoring Hockey. And one is not even positing it as an anachronism in a state where poverty, malnutrition, farmers’ suicides and appalling health care services are endemic.

Odisha got tremendous mileage during the Hockey World League (HWL) in December last year. This might have whetted the appetite of the Odisha government to go in for a never before deal to sponsor the Indian hockey team for the next five years. The League had at least served the purpose of rekindling an interest in the game among people in Bhubaneswar, besides resulting in significant improvements in the facilities available at the Kalinga Stadium. But the Rs 150 crore deal with the Hockey India (HI) has no such redeeming features. There is precious little that hockey or Odisha would gain in the process. All it would do is to showcase the state government as the new found savior of hockey and give the people of the state an opportunity to wallow in Odia pride.

The government not only spent lavishly on holding the HWL and the 22nd Asian Athletics Championship in Bhubaneswar, but the top bureaucrats were also not visible in their office chambers in the name of preparatory meetings for at least three months before. Neither has the state government bothered to come out with the figures of the actual expenditure, nor the poor people sought the same. It is discussed that the officials concerned have struck a gold mine in sports promotion while the BJD government is only too happy to play into their hands as long as it gives it some much needed mileage ahead of the general elections. Whether Rs 150 crores is worth spending by one of the poorest states of the country? Is our Make-in-India Nation so starved of corporate houses that a state government has to step in to sponsor the Indian hockey team? The nexus of SAI and Odisha officials and the broking agency that have helped clinch the ‘deal’ needs probe.

Since, we have jumped in to the pool; can we make use of the euphoria for promoting hockey in the whole of the state? Can we see that the equipments for the game of hockey is supplied to the schools and clubs of all 30 districts of the state? Can we arrange our national and state players to train and select at least one hundred district level players? Can we plan that a minimum number of ten players find place in our national team next?

Besides, it will be prudent in our part to arrange opportunity for the foreign players and officials to visit our places of tourism interest, before they return to their respective countries. We have to train our educated youth to speak in languages like Korean, Spanish, German to act as tourist guides for the visiting teams. We have to ensure that open air defecations are stopped in the tourism points, if not in all the places? Odisha is a poor state. It will be our duty to organize co-sponsors from international and national brands to see that the state exchequer is not strained much. The state government is for development of the people not to arrange events at the cost of the already stained exchequer.