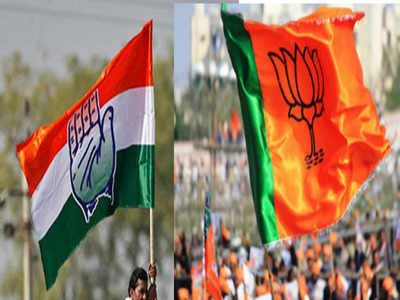 The results of the assembly elections in Rajasthan, Madhya Pradesh, Chhattisgarh, Mizoram and Telangana – the last set of elections before the 2019 Lok Sabka polls – are treated as indicators of voters’ mood. Of these five states, Rajasthan, Madhya Pradesh and Chhattisgarh belong to the Hindi heartland, where the Congress and the Bharatiya Janata Party (BJP) were locked in a direct contest.

The outcome in these three states matters much for the political narrative in the run-up to 2019. Congress’ claim of the principal opposition party has remained at stake. The Opposition is trying to forge a united front to challenge the BJP in 2019. However, a successful united front will require a strong core. The question was whether the Congress can play that role. For other parties to accept the Congress’ leadership, it has to demonstrate electoral success vis-à-vis the BJP. Post 2014, the Congress has not been successful in doing this. In 21 assembly elections held after the 2014 Lok Sabha polls, the Congress has been able to increase its seat share compared to previous assemblies in only six states. It could form a government on its own in only Punjab. A better performance against the BJP in these three states has buttressed the Congress’s claim as the natural leader of the anti-BJP coalition in 2019.

Rajasthan, Madhya Pradesh and Chhattisgarh have always played an important role in the BJP’s political fortunes. They accounted for more than one-fifth of BJP’s total votes in the 2004, 2009 and 2014 Lok Sabha elections. This is almost double the all-India share of these three states in the total votes polled. The contribution of these three states to BJP’s total Lok Sabha tally has been even larger than their vote share contribution. In 2014, the BJP won 62 out of the total 65 Lok Sabha seats from these states. We may recollect that more than one-fifth of BJP’s all-India votes and seats in 2004, 2009 and 2014 came from these three states.

Political impact of agrarian distress has been witnessed in these states. Rural distress has emerged as an important political narrative in recent months. Rajasthan, Madhya Pradesh and Chhattisgarh are predominantly agrarian states, with agriculture’s share in both their Gross State Domestic Product (GSDP) and workforce higher than the all-India average. As the BJP suffered significant reversals in these three states, it can be treated as an indication that rural distress has a big political impact in the 2019 general elections as well. In case the BJP manages to hold its ground during these few months, the validity of the argument that rural distress is causing problems for the BJP is bound to come under question.

Several different factors are being blamed for BJP’s defeats in Rajasthan, Madhya Pradesh, and Chhattisgarh. Some are blaming the effect of the wane in Prime Minister Narendra Modi’s appeal while others are crediting a Rahul Gandhi-led resurgence. National leaders have always played a prominent role in state elections – often holding rallies and public meetings in states to mobilise party workers, criticize the opposition and, ultimately, woo voters. Ahead of these assembly elections, both Prime Minister Narendra Modi and Rahul Gandhi, the Congress president, traversed the five states on behalf of their parties.

Unsurprisingly, these rallies increased in frequency as the voting day approached. More than 80% of rallies for both leaders occurred in the fortnight before polling with Modi rallies exclusively happening during this period. The final few days of an election campaign are most crucial in convincing swing voters.

Often local or regional factors have a strong influence on assembly election results. Hence, a better approximation of rally influence would be to examine how vote-shares changed in constituencies compared to changes in district and regional averages. Based on this metric, Gandhi seems to have had a bigger impact in raising his party fortunes compared to Modi.

Gandhi’s relative success in boosting party fortunes is a significant change compared to Karnataka elections earlier this year. In stark contrast to Gandhi, Modi’s impact on constituencies he visited seems much weaker compared to the past. The average vote swing in constituencies that Modi visited was lower than the average swing across the respective regions of those constituencies.

In both Gujarat and Karnataka elections, Modi had much greater success in boosting party fortunes, with constituencies visited by Modi witnessing higher vote swings compared to their regional counterparts. The Modi appeal may finally be weakening. Modi’s popularity seems to be waned over time although he still remains the most popular leader in the country. Modi was BJP’s trump card in the 2014 general elections and is likely to be so in the 2019 election campaign as well, but his impact is likely to be quite different from what it was five years ago.

Although the Supreme Court has of late given clean chit to the Rafale deal, the united opposition campaigned on this issue, saying that ‘Chowkidar’ turned to be a ‘Chor’; which has certainly confused many voters. Incumbency factor has played a role to oust the Saffron Party from power. The importance given to the young brigade in Rajashan and Madhya Pradesh by the Congress Party by pushing Sachin Pilot and Jyotirarinda Scindia respectively cannot be ignored, which motivated the youth against the BJP. Although it is too early to say that the indications of 2018 shall be replicated in 2019 election, there is scope for amendment.