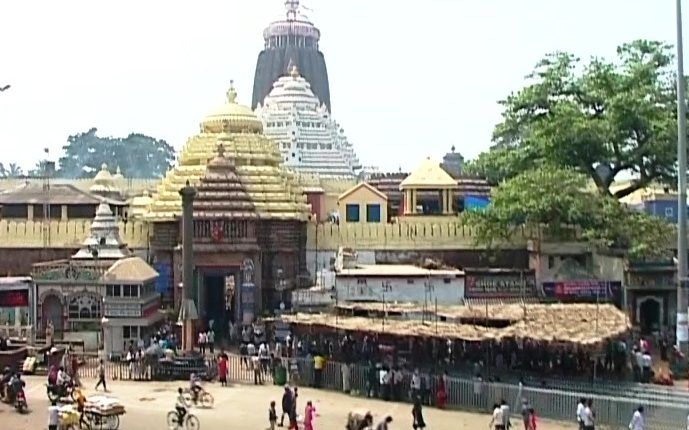 The stalemate between Odisha government and servitors of Jagannath temple, Puri, over the issue of restricting entry of devotees into the shrine’s sanctum sanctorum could not be resolved in time, with both sides sticking to their stands.  The Suar servitors staged a sit-in outside the temple demanding compensation worth Rs.50 lakh for the losses incurred by them owing to the delay in rituals.

The Shree Jagannath Temple Administration (SJTA) failed to ensure timely performance of rituals. Lord Jagannath and His siblings Lord Balabhadra and Devi Subhadra were not offered food for two days.

The problem nitiated, when there was inordinate delay in performing the rituals. The SJTA failed to replace a servitor. Since the Orissa High Court had directed that only the servitor on duty would be allowed into the sanctum sanctorum, the administration officials were in a fix to replace and nominate another.

Though the Mahaprasad was prepared in the temple kitchen, it could not be offered to the deities. Later, it was buried in the Koili Baikuntha in the temple complex. Besides, opening of Jagamohan for devotees was delayed. Following the incident, the Suaras were up in arms against the administration demanding compensation for the Mahaprasad they prepared.

The Lord of the Universe was left high and dry without food and sleep as the rituals went for a toss amidst total chaos resulting in wastage of tonnes of food and hurting sentiments of lakhs of devotees. We are sure, the stalemate shall be resolved on or before the ensuing Askyaya Trutiya, as the servitors are at loss financially. But, similar situations can never be ruled out in future days.

The SJTA has made it a practice to carry on the rituals of this great temple by managing an emerged situation. While welcoming the mindset, we shall certainly expect the government to continue the process of dialogue with all the departments of service providers, regulate the rituals of the temple to ensure the traditional system remains undisturbed and on the other hand the devotees are provided with the best possible facilities inside and outside the Sri Mandir. Any Temple is not the office of a government and hence, should not be managed by it. We have Sri Shankaracharya, Gajapati and a Mukti Mandap to guide. Time is ripe to educate the servitors, make them disciplined, which a politically elected government can’t dare. Let’s hope that the dialogue will continue now onwards, without waiting for another crisis to come up.